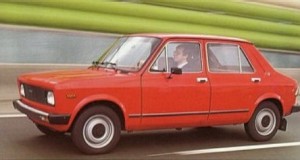 Yugoslavia’s answer to the Fiat 125 started appearing in British forecourts in the late 1970s alongside classics of Euro-tinniness the Lada Riva and Skoda Estelle. Most famously flogged in the UK via Swithland Motors, who went all-out with a TV campaign featuring Samantha Fox in the regulation tight-fitting T-shirt stiltedly enthusing about her brand new and reasonably priced Yugo hatchback to hapless, Morris Traveller-driving, Open University lecturer-resembling no-mark neighbour Wally. Swithland collapsed in 1993 after a massive fraud scheme was uncovered, but the Yugo itself continued until 2008, thus outlasting its namesake country of original by nearly two decades.