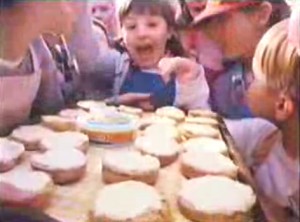 Captain Birdseye’s ‘crew’ was the epitome of this advertising genre: the all-singing, all-dancing chorus of stage school children giving it full-on eyes-and-teeth enthusiasm in desperate hope of landing a starring role opposite Metal Mickey. Problem was, while the captain capably delivered his lines in piratical baritone (‘when I was a lad, this may seem odd/I dreamt of fish fingers, prime fillet of cod!’) the kids were handicapped by that dreadful squawky timbre that results whenever a large number of children of varying ages try to sing together. Yet advertisers persevered. Dungaree-clad imps pranced o’er hill and dale extolling the virtues of Dairylea (‘straight from the tub/our mums have found/there’s so much more to spread around!’) or confidently proclaimed: ‘we can tell it’s Tizer/when our eyes’re shut!’ Occasionally pop songs were rendered all shouty: Donovan for Bird’s custard (‘pour on mellow yellow!’) and Madness’ ‘Baggy Trousers’ for Colgate Blue Minty Gel (‘mum and dad use it as well!’) Towards the end of the decade, however, the link between processed foodstuffs and children leaping around bellowing inanities at each other became more a matter for medical concern than celebration, and the genre slid quietly into remission.