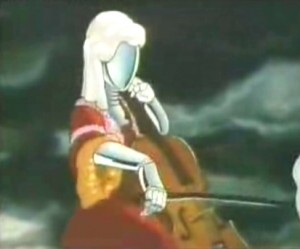 1983, and you’d be forgiven for thinking that pop’s brief and arguably less than bountiful dalliance with classical music, which peaked with the pomp of high prog had, the ‘slight return’ of Hooked On Classics aside, more or less fiddled its last. But that was to reckon without Italian chamber orchestra Rondo Veneziano, who brought guitars and synths to the classical party for La Serenissima, a neverending ‘diddle-diddle-durr’ refrain that – hey! – put the ‘rock into ‘bar-rock’ (er, ‘baroque’). This ‘waxing’ failed to scrape the UK top 50, but that didn’t stop it being ubiquitous, via guest appearances for the Rond on the likes of Pebble Mill (in 18th century clobber and spooky silver fencing masks) and Venice in Peril, an unfathomable cartoon screened during many an ITV strike, in which a bloke in a spaceship saves the canal city from watery doom by spiriting its veteran architecture away through space. Or something. All the while going ‘diddle-diddle-durr’, natch.