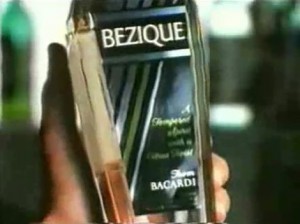 Cinzano and Campari began to look a tad retrograde in the brave new 1980s world of chrome barstools and rich men without moustaches, so distillers marketed a slew of ready-mixed drinks to capture that burgeoning female boozership. Taboo and Mirage (white wine, vodka and spices/citrus fruit respectively) set the aspirational standard with chiffon-clad women dreamily sipping the beverages as they reclined against marble columns and gazed out over an airbrushed landscape. Elsewhere, globetrotting models enthused about Monterez, ‘a delightfully bittersweet blend of white whine, brandy and a subtle tang of orange’. Most stomach-churning of all was banana-rum hybrid Calypso (‘never has the banana been so exotically drunk!’) Other ads sought to make provincial singles clubs look the epitome of urban swank. Lime-tinged Bacardi spin-off Bezique and fizzy infusion Volari were promoted as the one sure-fire way to turn a drab, empty nightspot into a vibrant hub of hand-to-mouth tittering and rolled-up jacket-sleeve seduction. And that very mating ritual turned up in the ads for pear-flavoured liqueur Calviere, with future Eastenders nasty Nick Cotton trying to lay the charm on a hapless temp in a Leicester Square nightclub by quoting the chorus to Bill Wyman’s Je Suis Un Rock Star. But these drinks were largely consumed for one purpose only: to get smashed as quickly as possible. Small wonder the most popular was the sophistication-dodging blend of British wine and whiskey that was Clan Dew.