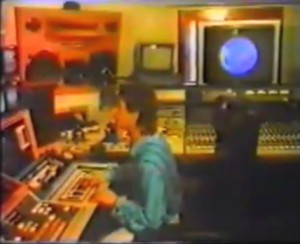 A go-ahead company founded in Newbury in 1973, Quantel is, perhaps more than any other institution, responsible for the change in the appearance of British TV from the 16mm film and caption card biscuitty sludginess of the 1970s to the twiddly, neon and pastel-hued, pin-sharp ‘electronic wine bar’ look of the 1980s. It all kicked off in 1978 with the introduction of the DPE 5000, a little box with a few buttons and a joystick that enabled excitable producers to flip the picture about the screen with the same gay abandon with which Terry Wogan treated his Blankety Blank question cards. LE departments took to it like ducks to water, and since the damn thing was so expensive it would be made to pay for itself anyway, it colonised the screen like crazy within a couple of years. Then came Paintbox in 1981, which enable wacky colourisation effects (end result: even more lurid magenta and lime green on the screen than before). Finally 1982 saw Mirage, a supersized box of tricks that enabled Paul Jackson to fold the Waterboys into a saxophone-shaped blob and spin them around the Saturday Live studio as the whim took him. By that point, TV was irreversibly digitised, and sales of Telecine units and Letraset plummeted.