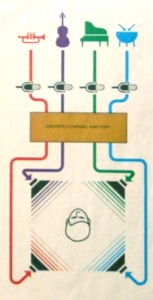 The 1970s were a hotbed of audio technological advancement, despite enthusiasts having to carry on with the same old vinyl technology that had been around for decades. The increasing popularity of stereo had enabled Mike Oldfield to ring a bell in your left ear while slapping a fretless bass in your right. With quadraphonic, he could also stab a Moog in front of you and play a Swanee whistle behind your back. Such entertainment riches were worth any price, even the considerable time and trouble of fixing four little wooden ledges high in each corner of the room for the speakers, and putting up with the attendant forest of cabling. It wasn’t just Oldfield – everyone from Acker Bilk to Van McCoy got in on the four-channel act, releasing quad LPs in a dizzying variety of rival, incompatible formats. Would you CBS’s SQ system, or will you JVC’s Quadradisc? Amid all this confusion, mass interest waned, and soon even Mike Oldfield flogged off those two superfluous speakers. Those little ledges stayed up for ages afterwards, though – a testament to the folly of a society that sorely overestimated the amount of available ears.