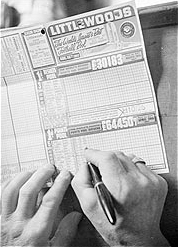 It wasn’t gambling. They said there was an art to it, and rightly so. Deliberating the relative footballing merits of Alloa v Cowdenbeath before decorating that weird rocket gantry diagram with a little cross – or not, as the case may be – was s skill to be proud of every Saturday, whether you followed the results on the Grandstand teleprinter as they spewed out, waited a bit for the stentorian voice of James Alexander Grodon to run through them in ceremonial order, or (shame on you!) just looked them up in the Sunday papers. Most of the pools action was divided between Littlewoods (the big one), Vernon’s (smaller, but at least they had their own ‘singing sensations’ for a bit) and Zetters (very much the dark horses of the competition). Collection was each Wednesday via that bloke your dad vaguely knew from the pub coming round to the front door, entrusted with spiriting your hard-chosen crosses off to pools HQ, determining if your beaming severed head would end up displayed on the outside of a future coupon, alongside your initials and the relevant amount of money. (Or, if you’d ticked the ‘no publicity’ box, seemingly you’d be slapped on the coupon anyway, but with a black bar across your eyes, suggesting you’d stolen the cash instead.) The make-up and workings of the rain-beating pools panel was famed in legend and song, until someone on Nationwide revealed it was just some ex-players and referees sat round a table with a few sandwiches, and not a solemn cabal meeting in an underground lair with a giant computer at all. One by one the myths fell away, until the lottery arrived to take the skill out of it once and forever, and the art of perming 8 from 10 fell into irreversible decline.