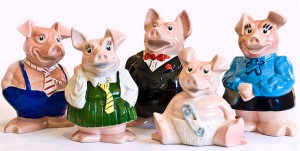 Someone, somewhere must have decided the mid-’80s economic boom wasn’t booming quite enough, because seemingly overnight, children who had previously limited their financial affairs to a Post Office savings book at the very most were encouraged to open proper, gown-up bank accounts and hand over their hard-earned car washing revenue. Perhaps the most insidious, beating the Anglia Top Savers’ Club and even the Midland Griffin Savers’ Scheme (free dictionary!) was this weird combination of the Banking Song from Mary Poppins and Franklin Mint promotion. All the hapless youngster was required to do – at least initially – was deposit a pound in Nat West’s vault. “For that,” explained the avuncular announcer, “your child gets Woody!” Quite. This was, of course, a porcelain piggy bank – wearing a nappy, oddly enough – the first of five increasingly aspirational porcine moneyholders (hang on, isn’t the money meant to be in the bank?) culminating in Sir Nathaniel Westminster (a joke shamelessly nicked off Lenny Henry). On top of that, you got stickers, some kind of half-arsed ‘activity pack’ and, best of all, a ‘wobberly wall chart’. If that wasn’t enough, said family of porkers cavorted round a pink-hued local branch in the TV ads, singing a cod-operatic paean to the Action Bank. “Pigaro!” Indeed.