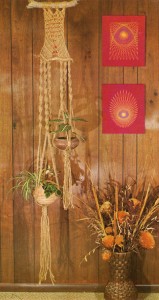 It may have begun in the 13th century (then again, it probably didn’t), but the 1970s saw macrame take off as the modish craft of the times. Pitched halfway between girly old knitting and the manly pursuit of splicing the mainbrace with a good sturdy sheepshank, macramé was the noble art of trying knots in a bit of brown string to create… well, there’s the thing. While you could wear stuff you’d knitted, and even crocheting could produce one of those flappy shoulder bags with a bit of work, the macramé repertoire was limited to: a) long, tassly pot-holders suspended from the ceiling, b) funny-looking owls with beads for eyes attached to a little bit of twig and c) sort of big flat wall-hangings demonstrating the various knotting techniques. As the decade came to a close, the public wearied of these limited treats and that big orange cork board you used to make the things on was retired to the attic on a semi-permanent basis.