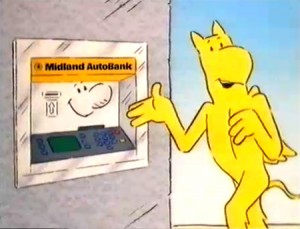 The Midland (or, as the jaunty calypso song in the ads had it, ‘Midd-er-land’) Bank’s bizarre, intimidating choice of a mythological lion/eagle monster for its emblem was softened in the early 1980s with a series of animated ads in which said griffin, quaintly rendered like a big-beaked Country Life butter man and speaking with the voice of Richard Briers, helped various customers get the most out of the listening bank. Quick to note the child-friendliness of all this, Midland launched the Griffin Savers account, in which juvenile capitalists were treated to griffin-branded pencil cases, folders, wallets and the Oxford Griffin Savers Dictionary, a copy of which could at one time be found in the school bags of one in three children.