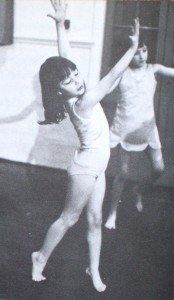 The theoretical practice that stated a child’s cognitive skills could be enhanced by encouraging association with physical movements certainly enjoyed one of the more remarkable passages through history, starting off in the rarefied climes of the Geneva Conservatory in the early 1900s but ending up with a bunch of barely-clothed barefoot six-year-olds jumping up and down on a splintery wooden floor. Music and Movement first turned up in British schools after World War Two in the shape of BBC radio workshops helmed by the starched-voiced Ann Driver. Infants were instructed to act out an activity in time with a piece of music picked out in lacklustre fashion on a battered piano – a simple enough instruction, but one hedged about with much mind-expanding hyperbole. Hence you would start off pretending to bounce a ball or skip a rope. Then came a bit of transmogrification: swim like a fish, or slither like a snake. Next, existentialism: flutter like a leaf, even sigh like the wind. Finally, all pretence of realism was ditched and it was time to ‘do our wide dance’ and other favourites from the catalogue. The principle (and the frugal dress code – was it still the Blitz?) persisted pretty much unchanged for decades. But you joined in because everyone did. You were only just out of your pushchair after all.