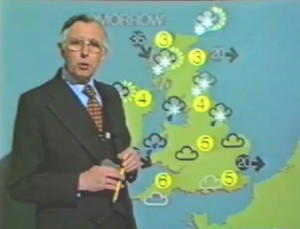 Those little clicky sticks concealed in the left hand have spoiled the nation’s weather forecasters. Oh, for those pre-1985 days when Bill Giles began the forecast with a little clutch of magnetized clouds, stuck a few over Scotland and removed others from just south of Daventry, before walking – yes, actually getting in some exercise – over to tomorrow’s map for further symbolic sleight of hand. Yes, sometimes they wouldn’t stick or they fell off or the word ‘GOF’ appeared over the Isle of Wight, but not that often. And there was always the delightfully weird sense that the whole thing was being done on the door of a gigantic fridge.