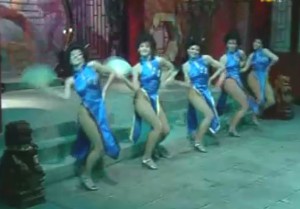 A well-drilled team of young men and women performing an intricately choreographed burlesque version of Tropical Heatwave while three middle aged couples ponder what exactly Bertice Reading meant by leaving them a scale model of a Routemaster bus? It can only be 321, and the capable hoofers under the aegis of a former member of The Young Generation, Brian Rogers. Note for pedants: they’re only the Brian Rogers Connection when they’re doing a full-on cabaret routine – when they’re just prancing about to the latest waxing (eg. on Live at Her Majesty’s) they’re simply The Brian Rogers Dancers. Very important, that. Rogers, incidentally, now runs his own performing arts college in Essex, along with his wife Jan, herself former member of the Connection, as well as ‘vocal group Champagne’.