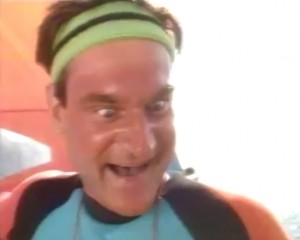 ‘Yom po-pom pooom… Ah! Guten morgen!’ Don’t you just hate those chubby, ebullient German holidaymakers, forever windsurfing up to your yacht and sticking their nose into your breakfast drink arrangements? Well, no, quite frankly. But, like the similarly made-up stereotype of the early-rising Kraut sticking his towel on the best sun lounger on the beach, sing-song voiced waterborne irritant buffoon Klaus colonized popular culture in the latter half of the ’80s, all in the name of selling also-ran instant coffee Cafe Hag. To be honest, he seemed a tad less hateful than the snide English get on the yacht, but we were never in the ad’s aspirational demographic anyway. ‘Enough for two, ja? Aaaaaaargh!’