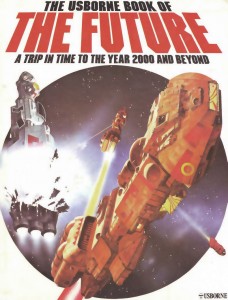 From the 1970s onward, Peter Usborne’s children’s factual publishing empire was the Oxford University Press for the pre-secondary set. Their colourful info-packed tomes, liberally sprinkled with friendly, big-nosed cartoon characters, were the darlings of the school library (when The Sorcerer’s Apprentice was on loan, at least). The Usborne Book of Things to do on a Rainy Day was a self-explanatory favourite. Two friendly, big-nosed cartoon clowns guided the indoor-bound reader through a plethora of homely activities: growing washing soda crystals, making paper hats, etc. The friendly, big-nosed, overcoated spies dotted throughout the Usborne Spy’s Guidebook inhabited an exciting world where unbreakable codes could be written on a belt wrapped round an old stick, and oppressive Eastern Bloc governments thwarted with the cunning deployment of lemon juice as writing medium. More heavyweight was the Usborne Book of World Geography, a comprehensive guide to the friendly, big-nosed peoples of the Earth, full of inoffensively rendered world facts. For instance, comparative gross national product was indicated by figures in national dress holding appropriately scaled money bags: while a sheikh from the United Arab Emirates rejoiced in his ten-foot sack, a peasant representing Bhutan put a bravely cheery face on his golf ball-sized pouch. Best of all, however, was 1979’s Usborne Book of The Future: A Trip in Time to the Year 2000 and Beyond: a mind boggling grab-bag of never-going-to-happen wonders like lunar Olympics, nuclear-powered artificial super-hearts, domed underwater cities, and Jupiter being taken apart and rebuilt as a big shell around the sun, for some unfathomable reason. Its timeline of inventions from 1980 to the twenty-second century has, twenty-five years in, so far proved to be something of a disappointment to the legion of thirtysomethings still awaiting that robot butler.