News that the pilot of Last Of The Summer Wine almost failed to get made at all has been filed eagerly in TV Cream’s ‘If Only’ box file, next to Richard Stilgoe almost writing a script for Dr Who and Margaret Thatcher almost not winning some crucial byelection or other back in the 1950s.

The box file in question is conveniently (for this blog) adjacent to another one marked ‘Is That Still Going?’, wherein TVC maintains an inventory of those programmes that ran on far past their Best Before date, usually because no TV executives could be arsed to think up something with which to replace them. Currently, the top 10 looks like this:

Esther should have gone the same time as Mrs T.

That weird non-feminine femininity, the hotch-potch of now-here’s-the-good-news, now-here’s-some-more-bad-news, all those bloody hangers-on – it had lost all appeal come the end of the decade.

And the same goes for Esther (ho fucking ho).

Here’s La Passionara with a rather desperate bunch of ooh-it’s-the-90s nancies (note how Doc’s still managing to hang on in there, replete with Jumper Sent In By Thoughtful Viewer).

Seemingly remembered for all the wrong reasons (i.e. for being good, funny, subversive, charming and so on) instead of being remembered for its insufferable boredom and dreary sermonising.

8) JIMMY WILL FIX IT

“It ended because I told the BBC it should end,” remembers Jim, wrongly. In reality ratings had slumped – rightly so, given how fixes such as getting to help the chancellor of the exchequer write the Budget were, in the words of Carter USM, Lamontable. 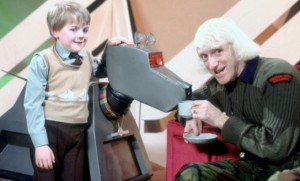 7) ARE YOU BEING SERVED?

The most uncommercial, threadbare-looking and least patronised department store in the whole world somehow manages to stay in business for 13 years (until 1985!) thanks to a turnover wholly comprised of references to tits, homosexuals and “sales drives”.

It just looked wrong having Jim Hacker turn from fallible bumbler with a heart in the right place to pompous preener with no touch of humanity. Especially as Sir Humphrey and Bernard didn’t undergo any personality rewrite whatsoever. 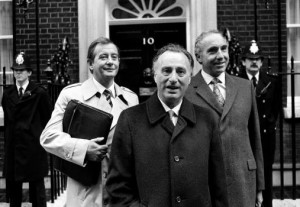 The issue here was probably a studied reluctance to move with the times. In other words, Ted Rogers thought it was still 1963 when it was actually 1987.

Hence the old-time variety schtick. Hence the “surprise” guests from decades ago that most of the viewers couldn’t give a toss about. Hence the convoluted parlour game riddlery when most people didn’t have parlours. Hence Ted doing yet another bloody tribute to Danny Kaye. Hence a remote-controlled bin being thought funny.

Any programme that boasts a chirpy whistle-along-with-me theme tune replete with affable talky bit from your titular ordinary copper (“Allo, that boy with the mouth-organ’s back again!”) deserves something of a lengthy run on the box, but perhaps not one that takes it well well past the point that “teddy boys” stopped wanting “their capers to be seen”.

Or, indeed, the point that teddy boys stopped.

Now come on. Who ever thought a line-up of Beadlebum, Rustie Lee, Martin “P” Daniels and the other one was an idea worth half a second of anyone’s viewing consideration? Where’s the frumpy one in a big frock? Where’s the gnomic head boy? Where’s the multi-coloured jumper?

The man’s divvying and all that endless East Anglia scenery might have been palatable for a couple of series, but when it dragged on into the 90s and those dreaded words “Executive Producer: Ian McShane” suddenly turned up on the credits, all charm disappeared as fast as a predictably rare vase at a predictably unassuming car boot sale.

The best thing Michael Grade ever did was pull the plug on this noisy, shouty, unfunny parade of gunge, lettuces and mincers.

Fuck knows why Janet Ellis is here; at least she escaped with eardrums and career intact.