Excuse the Daily Express-style headline, but apparently Glynn Christian has just been given a lifetime achievement award for…well, being Glynn Christian.

The erstwhile Breakfast Time chef was honoured for his career at the Great Taste Awards 2008. The accompanying press release reveals he first opened a delicatessen in 1974 and “38 years later, that deli still exists [all the more remarkable for it being, at the time of writing, only 34 years later], in the same position, boasting the same name” – yes, a bit like all those branches of Tesco and Sainsbury’s that opened decades ago and which, for some reason, still boast those precise monikers today.

Anyhow, let’s not forget that “1974 was an age when fine food was prawn cocktail, overcooked sirloin, black forest gateaux and Mateus Rosé, all finished with a coffee with thick cream floating on top.”

Here’s Glynn, back on breakfast television earlier this year, squashed between Francis Wilson and Sue Cook. 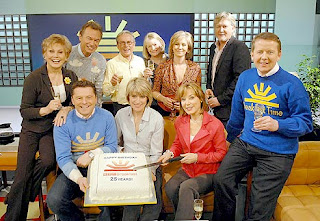