The art of the Christmas TV schedule 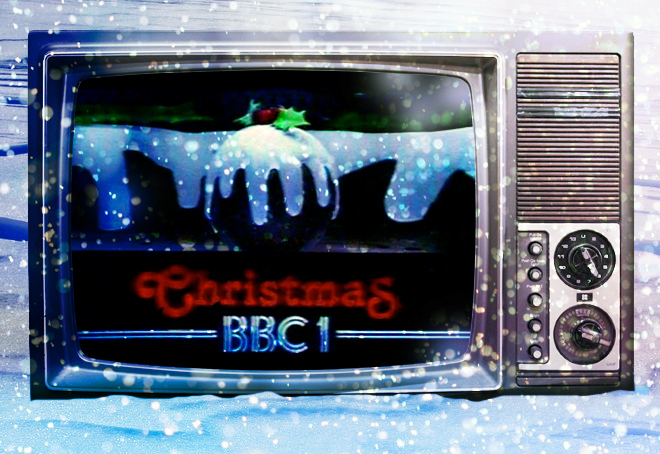 Everyone knows how massive Christmas telly is. That’s why the TV listings magazines come out weeks and weeks in advance and why TV Cream is constantly speculating from about August what the big Christmas Day film’s going to be. But it’s not just the programmes that make Christmas so special it’s when these programmes are shown.

One way to spoil the Christmas season is to put the wrong programmes on at the wrong time. Take 1989, for example  you had loads of great shows, like The Jolly Boys Outing episode of ONLY FOOLS AND HORSES, the last ever EVER DECREASING CIRCLES and, er, WOGAN’S CHRISTMAS FANCY DRESS. But on prime time in Christmas Night BBC1 gave us CROCODILE DUNDEE and MISS MARPLE: A CARIBBEAN MYSTERY  rubbish! They’re too long and much too hard to concentrate on when all your relatives are making a right racket.

There are times, though, when the broadcasters  or, at least, BBC1 get it exactly right and put together a killer schedule of back-to-back classic shows, keeping you glued to your sofas all night. Of course, nobody watches any other channel at Christmas, so we’ve scoured the archive to find those evenings on BBC1 when it was all killer and no filler. So what are the perfect Christmas nights of the past? 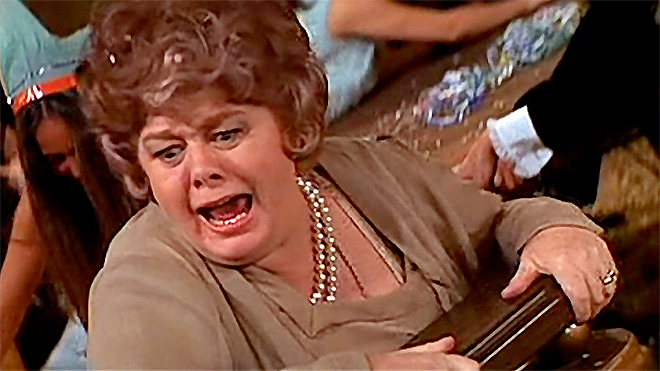 It could be said that Christmas Eve is the most exciting day of the holidays, as you anticipate all sorts of excitement in 24 hours’ time  before your expectations are slightly crushed. What you want, then, is loads of big, brash light entertainment to stop you from jumping up and down for a bit to accompany the thrill of it getting darker and darker.

If you were nine years old in 1981, this must have been the most exciting evening’s television you’d ever seen, with a whole host of kid-friendly comedy stars proffering slightly mucky but generally harmless fun. Surely every kids’ comic staples in 1981 were Sid Snot, Mr Humphries and Eddie Large in a dress? In between them all, because it’s a Thursday, it’s Pops  not the Christmas show but a normal weekly edition with the neon turned up to eleven and cracking pop from Dollar, Altered Images, Human League (the one with Phil getting a load of silly string in his face) and, er, Elvis Costello. Then after Cuddly Ken’s first appearance on the Beeb it’s a Christmas cinema staple  not a premiere, that was in 1979, but still a big draw and exactly the sort of cheap thrills we demand from Christmas Eve telly. Indeed, so amazing was this line-up that one Andrew Collins, in his diary, renamed 25th December 1981 as “The Day After The Poseidon Adventure”. 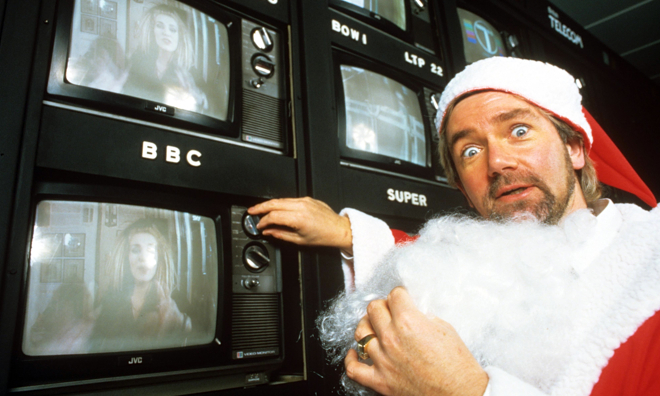 We all know that Christmas Night is the broadcasters’ shop window, but there’s still the rest of the day to get through first. Obviously, you don’t want anything here that you need to actually sit down and watch, but a bit of excitement while your dad’s rummaging around for spare batteries wouldn’t go amiss.

This timing works out brilliantly, we think. Before it begins there’d be some festive test card music and suitably seasonal Ceefax graphics to accompany you opening your stocking, then the first two programmes would help fill the gap after you’d got bored of coughing into the
toilet bowl to wake your parents up. Surely they’ll have surfaced by the time the religion comes on and then you can abandon the box to open your presents, switching back on after the film’s finished. Surely, at 45 minutes, that must the smallest amount of religion ever
broadcast on Christmas Day, compared to the three and a half hours from TV God Michael Hurll, who produced all of the last three programmes. You knew whenever you saw Michael Hurll’s name in the Radio Times credits that the programme would be unsubtle, trashy and
brash - ie, exactly what you want to see on Christmas Day. 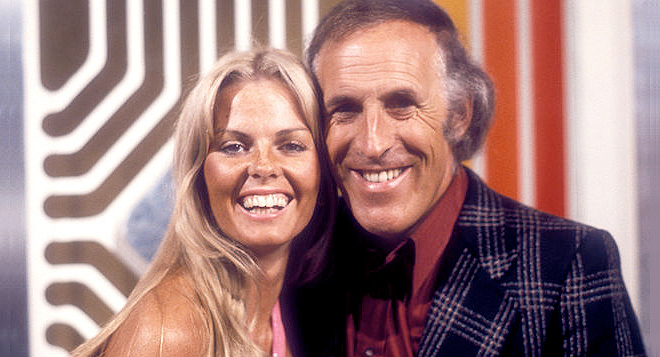 You don’t need us to explain this, do you?

Well, everyone bangs on about 1977 as the ultimate Christmas Night, but because it was a Sunday, you had to sit through an hour of religion before it all came on. All the big hitters are here as well, without the need to be bashed around the head by a vicar beforehand. The weak link is probably the Gala Performance, an hour of light classics presented by Michael Flanders, but we quite like the scheduling as, if you fell asleep during that, you’d wake up for MR James’ shit-scary ghost story and it’d be even more terrifying. The added bonus here was that this was one of the last times for a while you got to stay up late before the three day week put the kybosh on late night telly. And don’t forget, you can see this very Gen Game on BBC2 this Boxing Day. Hooray!

No more presents to open. The Beano Book long read. Boxing Day can be tough work, so you need some indulgent telly to get through it. With the relatives probably packed off, this is the time to sit back and enjoy some serious telly watching.

So you’ve got “your Boxing Day bingo boy” and sitcom silliness to start you off, then a cracking bit of cinematic fluff, here getting its TV premiere. Dallas is perhaps the odd show out, and is only really here because it’s Wednesday, but at least it’s not on Christmas Day like it was in 1980 and 1981. We slagged off Miss Marple earlier on, but although it’s not a Christmas Day show we think it’s just right for the more involved Boxing Day slot  and it’s the first one ever too. Then for a while Allen was the official fun-poker at the festive season.

It’s official  New Year’s Eve telly is bloody awful. Always has been, always will be. The idea is that everyone’s out, so it’s a waste putting anything new and interesting out. It’s tough to find a great New Year’s Eve, so here’s the least worst.

This is still pretty rubbish, starting off with “an opportunity to see in one evening the story enjoyed by so many as a serial last year”. At least the film’s a premiere, and everyone in the world’s on Penelope Keith’s splurge of clippage, while there’s no better way to welcome in the new decade than with Reginald Bosanquet, Aiden J Harvey and Andy Cameron on the cliched Scotch quota-filler at midnight. In fact the only reason we’ve chosen this is because they repeated the Gen Game on UK Gold a decade or so ago, and left in Larry announcing at the end, “1980 is nearly upon us, and the Orient Express is waiting at the station”. We just wanted to mention that.

As opposed to the previous night, New Year’s Day is the night where you’re not even expected to move away from your sofa. One of the “big” days of the holiday, this is perhaps second only to Christmas Day it terms of prestige, and you expect something extra-special.

A cracking triple bill of light entertainment kicks the evening off. It’s a bog-standard normal Blank, but none the worse for that, especially with a line-up of, from the top left, Ian McCaskill, Kathy Staff, Sir Ken of Bruce, Bonnie Langford, Bernie Clifton and Aimi McDonald. Then there’s sundry spoonerisms before Wogan, what with it being a Friday, and a pre-recorded show where Fry and Laurie join Dawn French to launch that year’s Comic Relief. We’re not sure if this is the show where the Comic Relief representatives ended up giggling when they had to explain how they were going to try and stamp out diarrhoea in Africa, and then later one (Hugh?) picked up a fact pack only for everything to fall out and said “as you can see, it’s got a trap door bottom”, and another (Stephen?) said, “Ooh, back to diarrhea again”. Maybe that was another year. Either way we have fond memories of it. Then there’s a big brainless Mel Gibson film to round off the holidays, and there was still a weekend to come! Result!