(Advance apology: the following has precious little to do with old telly. Or perhaps it has. Just not in the usual vein of giggling about Brucie or cringing at Jimbo and the Jet Set.)

The BBC is the greatest institution in the world. But it can also be one of the most the maddening, as the events of the last few days have once again proved.

To a degree there is a tired and long-established game being played here. Whenever the axe needs to be wielded down at White City, the most outlandish of all possible cuts are mooted, the most vocal of critics delight or decry in the rumours, and the most bonechilling of futures is predicted.

What actually comes to pass tends to be slightly less dramatic than first proposed (or feared, depending on your point of view). 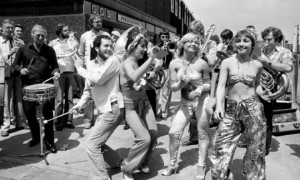 This is what happened back in the early 80s when cuts had to be made and it was decided to ditch a slew of in-house orchestras, resulting in Musicians Union barges sailing up and down outside the Houses of Parliament giving recitals while MPs sat inside blithely debating the gutting of Radio 3.

In the end, thanks quite possibly to the best efforts of Cuddly Ken and some leggy lovelies, live music did not vanish off the face of the earth.

A few trims were made here and there.

As will probably happen again.

But this doesn’t mean any of this game-playing is actually any good. It isn’t. It always makes the BBC, to be frank, look fucking pathetic.

The Beeb it seems cannot help getting itself into an almighty flap whenever any of its enemies in the press and parliament start talking about money. The greater the volume of the enemies’ snorting, the greater the flap.

So we arrive at the situation of today, where even the Culture Secretary himself, a former BBC employee, appears content to not step in and at least counterbalance the disembowelling of Auntie with something in the way of an alternative point of view. 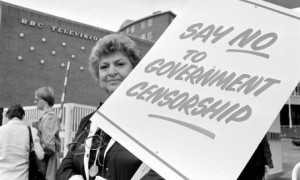 And hence the Beeb, which hasn’t been able to stand up for itself really since Greg Dyke left, responds in kind with a horse-frightening manifesto of in-house devastation.

A manifesto, moreover, that suggests the BBC itself doesn’t know who or what it is for.

The BBC is for everyone, because it is paid for by everyone: that is its beauty and its genius. It is not beholden to politicians or the stock market or shareholders, only those who fund it. Us.

This proposed list of cuts rejects that foundation violently. It implies the BBC is in thrall to those who wish its destruction: the gobs in the press and in parliament who hate (and fear) the notion that something can and should be both popular and distinctive.

But what’s wrong with being popular and distinctive? The BBC is the only broadcaster that nowadays manages both in terms of scale and scope, and it manages them spectacularly*.

The items up for abolition are unequivocally distinctive. In fact, stuff like 6 Music and the Asian Network are among the most distinctive things the BBC does – yet they are to go, and other less-defined offerings (let’s say it: BBC3 and Radio 1) appear to be untouched.

6 Music and the Asian Network may not be the most listened-to stations on the BBC, but then if that was the criteria for shaping the character of the corporation, Radio 3 would have been dead decades ago.

All in all, it’s a hopeless mess that will not please anyone. The hatchet-wielders won’t think it goes far enough, the BBC cheerleaders (count us in) will say it goes too far.

The Beeb needs all the friends it can get at the moment. Unfortunately its management has just succeeded in turning its most loyal followers and devotees, the one group it needs the most, into one great big cloud of fury and opposition.

*Wake Up To Wogan was a classic example: the sort of thing you wouldn’t get on any other national radio station, yet demonstrably popular as well. Unfortunately it’s been replaced by something that may or may not be popular, but it sure as hell isn’t distinctive**.

**Talking of which, where’s Evans gone this week? He’s billed in Radio Times, but this morning there was Richard “Na night” Allinson, apologising for being unable to bring us the Chris Evans breakfast show. Has it started again already?