As you’ve hopefully gathered by now, TV Cream is in the middle of running its biggest competition yet: a puzzle trail set in Television Centre to find a mysterious valuable object. 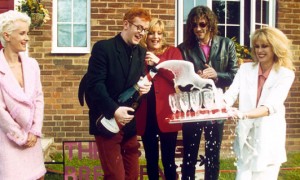 Ben the Boffin popped into TV Cream Towers earlier today (he’s developing a computer game for us based on Larry Grayson’s Generation Game).

While he was here he let slip the treasure is not to be found in the square that shares its grid reference with first half of the postcode belonging to the London borough of the Big Breakfast house.

Related Items:A self-peeling banana that is funnier than you'll ever know, Anorak of the Week, Chickens that were either going to be killed or eaten, Good morning to the boys, Good morning to the girls, I don't care what they're doing on the other side - it isn't half as good as this!, Invention Corner, One lump or two - it's up to you, Pregnant umbrellas, Someone wondering if they should get a dog or a girlfriend, Superhints, The old last-minute switcheroo, Things you weren't supposed to phone in about because they were just for fun, Whose Washing Line Is It Anyway?, Zogabonds
Share
Tweet
Share
Share
Email
Click to comment