The hook for today’s Puzzle Trail square is the only person who’s successfully appeared on both Comic Relief and Newsnight*.

It’s Lenworth Henry: erstwhile funnyman and the first black person Middle England ever saw on television; now just a man. Who does a bit of Shakespeare.

He’s broken off from munching on a entr’acte snack to supply us with the tenth of our Puzzle Trail clues: 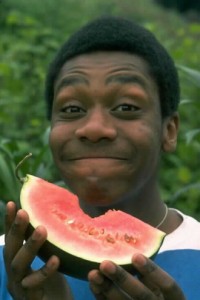 To get the grid reference of the square you should cross off the map, take the first letter of the only show Lenny’s done that has an exclamation mark in the title, and add that to the number of the Style Council album for which Lenny contributed spoken word vocals.

*By walking from one studio to the other during a live broadcast.