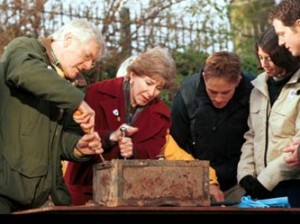 With the close of the year fast approaching, a tremulous anniversary looms.

That’s right, it’ll soon be precisely 10 years since the end of the 1990s: a vibrant, frisky, franchise-consolidating, Five’s Company of a decade, commemorated on the previous (and still, semantically, official) version of the TV Cream website in the shape of a Time Capsule.

This repository of billings was recently dug up from the place where it had been laid down on New Year’s Eve 1999 (just over there) pending relocation (to just over here) and absorption within the body of the new site.

All of which leaves an empty casket, a hole in the ground, three navvies leaning on their shovels looking shifty, Bernard Cribbins, some non-waterproof linings and a man from the council wanting to know when that mound of earth by the pelican crossing on the Arkwright road is going to disappear.

The solution, naturally, is a 2000s Time Capsule. Well, natural enough to the man from the council, who’s just mentioned that he’s actually a bit of a fan of TV Cream and loves the new look of the site, although his favourite features are “the early, funny ones” and as such he can’t wait to see what we’re going to be doing to Rules of Drama.

What would you class as shows worth burying deep underground for future generations of, erm, people to learn some visceral truths about the years 2000-2009?

The list, literally, it not endless. All suggestions, however, are welcome!