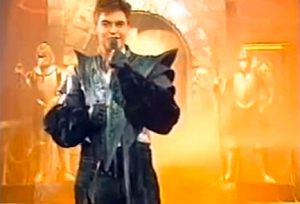 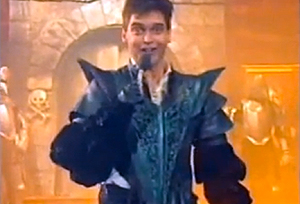 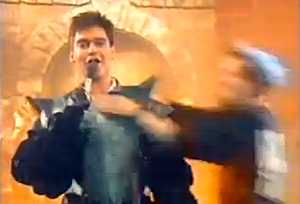 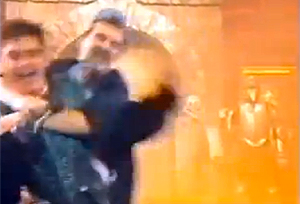 The great thing about Smash Hits was how democratic it was – certainly not just confined to teen fare, if you were in the charts you were in the magazine, and that spirit of openness continues when Ver Hits appeared on the telly in the shape of the Smash Hits Poll Winners’ Party. A major TV event in the day when pop was still strictly rationed on our screens, grebo trailblazers Carter The Unstoppable Sex Machine don’t at first glance appear to be the most obvious choice of guests but they were in the charts and provided something of a contrast between New Kids of the Block and Chesney Hawkes (although late 1991, just after New Kids’ pomp and before the rise of Take That, offered up pretty thin gruel as far as teen idols went). That said, their political lyrics and distinctive fashion sense were likely to have baffled and bored much of the audience, until a spectacular climax. Such was the fast turnaround of acts on the show, all the bands were obliged to mime and the issues of live TV meant some were faded out early to allow the show to run to time. Jimbob and Fruitbat weren’t particularly impressed – and had also enjoyed some pre-show hospitality – so decided to indulge in some time-honoured rock posturing at the end by smashing up their equipment. Host Pip Schofield found that terribly amusing so made what seem pretty quick-witted pointed remarks about how the band were “pushing back the frontiers of music”. Fruitbat decided Pip was taking the piss a bit too much and launched himself at him. The framing of this moment is absolutely beautiful, Fruitbat coming from absolutely nowhere and taking the pair of them off screen, leading to a panicked director to immediately cut to a shot of nothing in particular, but ever the professional, Pip immediately dusts himself down, has a good chuckle and then continue s, albeit with half his Halloween-themed costume now on the floor. Apparently Carter were frogmarched from the venue and told they’d never appear live on the Beeb again, but Pip took it all in good part and posed for a photoshoot in the next issue of Ver Hits with a Fruitbat lookalike and a baseball bat, while a few million more people knew who Carter were and within a year they’d had a number one album. And rightly so, they were a great band.