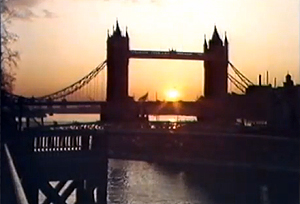 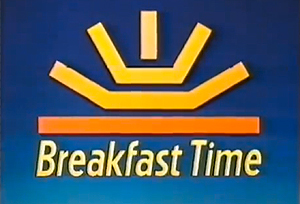 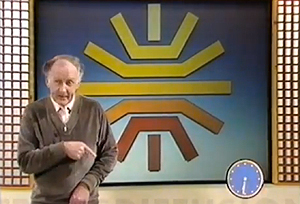 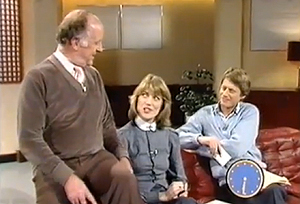 The launch of breakfast telly in Britain was fairly controversial at the time, to the extent that when the IBA gave out their pitch documents for those wishing to bid for the franchise to run it, they continually referred to “if a breakfast licence is awarded”, giving them the opportunity to simply write off the whole thing. But at the Beeb, Ron Neil, editor of the soon-to-be-launched Breakfast Time, had a secret weapon to make watching telly at half past six in the morning the most natural thing in the world – Frank Bough. Having been on television non-stop for some twenty years, presenting Olympic Games and General Elections, Bough was a hugely popular figure among the audience, who knew they were in safe hands. His laid-back, avuncular approach combined credibility with cosiness, and so on that bleak January morning in 1983, those tuning in out of interest to “the last new thing in television”, in Neil’s words, were greeted with the lovely ring-a-ding theme tune (and incredibly long title sequence that goes on for well over a minute with a virtually static image) and then Frank’s opening words. His tone was reassuring and instantly you felt at home, and those opening moments, judged perfectly, set the tone for a big hit show. What’s just as important is what Frank’s wearing – as after he showed up for rehearsals wearing a jumper, Ron Neil immediately told him to stick with that for the shows itself, something of a departure from the old way of doing things at BBC News and an agreeably ordinary form of dress, exactly the kind of thing the average viewer would wear, making it seem totally inclusive. Allied to the mystique of Selina Scott, Breakfast Time got the mix exactly right and rightly thrashed the complacent ITV. Noel Edmonds, Russell Harty and Terry Wogan were also considered for the role of Breakfast Time anchor but none perhaps had Frank’s mix of authority and affability, and without him it’s questionable as to whether breakfast TV would have been a success in the UK.