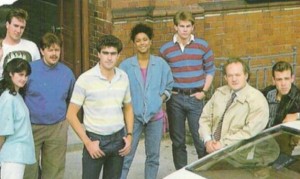 BILL-BAITING FRIDAY night coppering, focusing on seven wet-behind-the-ears trainee detectives, taken “under the wing” of textbook world weary hard-but-fair copper Rockliffe, played by moody IAN HOGG in a maroon anorak. Chanty nursery rhyme type theme song, with lots of tower blocks in the title sequence to denote grit, before Rockliffe and charges stood moodily in front of a van with show’s title written on the side in the grime as a blue light flashed. Practically every episode set on some council estate or other, and plenty of hot-headed mistakes from the decidedly rash Babies to raise the ire of the beleaguered Rockliffe. At least one McGann brother well to the fore, but stars of the show were reformed crim Steve Hood (BRETT FANCY), charismatic Welsh lardbucket Paul “Get us a pork pie, will you, and a sachet of brown sauce” Georgiou (MARTYN ELLIS), and not-at-all-unattractive Karen Walsh (SUSANNA SHELLING), forced on one occasion to pose as a nurse in order to catch a rapist: “Are those tights or stockings?” demanded a lustful McGann, and indeed the entire fourth form. Slightly annoying stylistic gimmick of constantly circling cameras detracted slightly from the action.