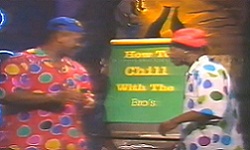 COMIC SHOWCASE at name-donating London nightspot which gave valuable Saturday night airtime to some particularly brilliant new comedians from either side of the Atlantic and, of course, some indefatigably awful ones. Series one was hosted by the craggy face and craggier jokes (“I’m writing a book about trousers, and yours are interesting sir – they are definitely a turn-up for the book”) of ARTHUR SMITH, introducing brilliant five minute sets from MARK STEEL, JACK DEE, and proving, for the first of many times, that PAUL MERTON is largely terrible when stifled by a script. Music came from the B52S (“it’s the Lancaster Brothers – oh hang on…”) in full Love Shack mode. Series two, now themed by C&C Music Factory’s “Things That Make You Go Hmmm” and on a cartooned set, relied more heavily on American performers, with BILL HICKS and PAUL PROVENZA on fire and DENIS LEARY getting his sickest gags repeated on POINTS OF VIEW (“My father died of throat cancer, and I was so upset…”). Impossibly awful Brixton double act CURTIS & ISHMAEL (“Rankin’ John Major Hi-Fi International!”) were hosts, with their own “How To Chill With The Bro’s” shtick providing semi-tolerable intermission material (“I waan it fi boss out me eardrum, riiiiiiiight?”) while STEPHANIE HODGE or RONDELL SHERIDAN (“who makes this decision if you’re obese or not?”) got ready. Among the British comics, even SHANE RICHIE got on, talking about pubic hair and Freeman’s catalogues, while SIMON DAY got residency status as TOMMY COCKLES (“and I was born and raised in the music halls!”). Music came from RICK ASTLEY, whose iconic appearance helped Never Knew Love shoot to No.70 in the charts, and BROS, performing dimly-remembered and universally-disliked comeback single Are You Mine?. If that wasn’t bad enough, the programme also handed DAVID BOWIE his first appearance with TIN MACHINE, and from then onwards we knew the end was nigh.

Related Items:"I'm going to get one of those tracheotomies so I can smoke two cigarettes at the same time!", "They really were marvellous times!", "Whether in Parliament or on Speakers Corner; Married to a girl by the name of Norma!"., Arthur Smith, B52s, Bill Hicks, Bros, Curtis & Ishamel, David Bowie, Denis Leary, How To Chill With The Bro's, Jack Dee, Mark Steel, Paul Merton, Paul Provenza, Rick Astley, Rondell Sheridan, Shane Richie, Simon Day, Stephanie Hodge, Tommy Cockles
Share
Tweet
Share
Share
Email