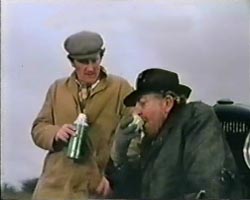 Up from London to the east midlands town of Stanton with a van load of parachute silk, cockney draper Alfred Bagley (Paul Dawkins) quickly makes his mark on the local council scene, ingratiating himself with councillors, and gaining entry to the local Masonic lodge. Slowly but surely working the milieu of Tory, Labour and hard-left councillors and businessmen, he acquires a few slum properties before setting up a building firm, drafting his pompous yet hapless nephew Roderick up from Ealing, with family in tow, to head up the firm. Tory councillor and estate agent James Avon, likewise in the trade with his son Clive as chief architect, is dealt with in a meeting where Bagley boldly lays down his new business method – acquire a list of tenders for any job, then get his son to submit a lower one, clinch the job, and if events on site just happen to push costs back up, so be it.

Shocked, Avon swears Bagley can never get away with such a scheme, but Roderick’s son Sidney (Roger Lloyd-Pack) arrives with handy blackmail evidence of Avon’s son’s dishonourable war record, and it seems Bagley’s final enemy has been neutered. Roderick’s daughter Lucy (Susan Penhaligon) gets hitched to the son of a shortbread magnate in a riotous, drunken and catastrophic wedding cunningly held on the day of Elizabeth II’s coronation. In front of family and local grandees (including former hardline socialist Tom Browne (David Daker), now Lord Mayor) Bagley gives a speech which quickly veers from standard father-of-bride cliche into a frank and disturbing life story, including a free admission of cannibalism in the trenches during the Great War, and ends up with a solemn declaration of nihilistic brutality.

Then, during a bizarre cake-cutting ceremony, Bagley collapses and dies. Fast forward to the end of the Bagley empire, when the great and good meet in a pavilion after a cricket match against the police force, to chew the fat and lament the fact their various weaknesses have left them all chasing after Roderick Bagley for wealth and influence. Tom Browne, now Bagley’s head of PR and a major Labour party player, introduces cabinet minister Raymond Finch, who it transpires has been given control of Bagley’s Hong Kong interests, once again leaving an Avon – Clive this time – licking his wounds. Clive responds desperately by flinging horse dung at Finch, but the alienation of powerful ally is nothing compared to the news of the inevitable – the collapse of the shoddily-run Bagley building empire, and Roderick’s personal bankruptcy.

There follows a disastrous trial which sees Roderick name and shame just about everyone he’s ever dealt with, blackmailed or bribed, though Browne promises to schmooze everyone he can, up to and including the fraud squad, to keep the extent of corruption under wraps. Finally, in the present (ie mid-’70s) the disparate parties, now all out of pocket and down on their luck, meet up at Sidney’s seedy strip club to celebrate Roderick’s release on parole. He’s not present, however – he’s been bussed off by his sons to a home in Hastings. Sidney regales Browne, Avon et al. with his latest plan to revive the empire – Chinese heroin. “The perfect product, totally artificial […] creating its own market, 100{30e2395aaf6397fd02d2c79d91a1fe7cbb73158454674890018aee9c53a0cb96} consumer identification, if there’s a glut the demand goes up, if there’s a famine the demand goes up, an endless spiral of need and profit […] the dying and would-be dead are its market. It’s a winner”. 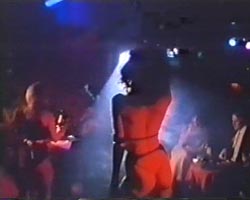 Originally staged by Richard Eyre as the first Nottingham Playhouse production under his tenure, Howard Brenton and David Hare’s play has its roots firmly in the agitprop collaborations of Brenton, Hare and Tony Bicat’s Portable Theatre Company of the early ’70s, with all the associated weaknesses. Characterisation is pushed to the back to make way for a series of types and symbols – all the better to display the play’s heavily didactic denunciation of both untrammelled capitalism and the people on both sides of the political spectrum who voluntarily allow it to steam ahead unhindered, but at the same time risking a shrillness and hysteria that dates the play in places. (Though it’s never a humourless piece – the ludicrous Masonic initiation and deranged wedding reception are brimming with farcical invention, and Roderick’s children first appear in short trousers and sailor suits, with no other attempt to make them look young.)

It’s reminiscent of such legendarily unsubtle Portable Theatre fare as the six-way collaboration Lay By, a play taken from a tabloid headline, written in crayon on sheets of wallpaper, which ended with the main protagonists being butchered and made into jam (The final stage direction to the original play had the ground swallowing the Bagleys and co up). Some changes are made – the cricket pavilion was an outdoor hunt meeting onstage, which was presumably deemed too tricky to shoot on the obviously tight budget. Indeed, the ramshackle quality of the piece – mainly studio-bound, with a few location inserts, and punctuated with interstitial dates and archive footage – works against the play for much of the time.

Director Mike Newell also has a hard time condensing the masses of character and incident into 75 minutes – some scenes fly past so perfunctorily it’s hard to take every significant exchange and event in. The difference between this production and Hare’s later work in the strand – measured, thoughtful, ambiguous character-driven pieces such as Licking Hitler and Dreams of Leaving – is immense. What it most resembles, in PfT terms, is another Nottingham production, Trevor Griffiths’ Comedians, which is as heavily symbolic and didactic as Brassneck, yet manages to work as a story, full of believable characters rather than masks, on top of that (Griffiths had collaborated with B&H in the early days, and his Country makes a much better stab at examining the inner lives of capitalist empire builders). But for all its on-the-nose message wielding, the authors’ sheer crazed delight in ripping apart their target – their brassneck, in fact – makes for a highly enjoyable, if flawed, chunk of polemic.