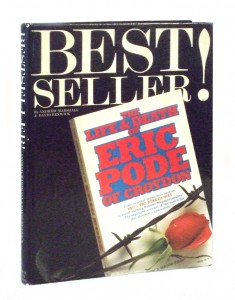 Andrew Marshall and David Renwick. Aren’t they a panic? From End of Part One through Whoops Apocalypse and Hot Metal to the criminally forgotten pitch black Briers showcase If You See God, Tell Him, theirs was a comedy writing partnership that flailed in all directions, but somehow managed to strike gold practically every time.

The flailing began in earnest with Radio Four sketch meltdown The Burkiss Way,* a melange of unassuming insanity that played Fred Harris off Nigel Rees to tactically disorientating effect, switching from News Huddlines-esque cornball punning to controller-troubling dodginess at the muted turn of a script page.

As the series wound up, it made the transfer to print which few radio comedy shows manage. Leafing through Bestseller!, it’s not hard to see why. TV pantechnicons like Python could generate sufficient money upfront to pay for that all-important design expertise that was required to make the technical tomfoolery work. But the Burkiss book had a budget about the size of one of its shows, and it shows. Magazine and newspaper parodies lack the convincing typesetting and photography of the big boys’ versions, often being rendered in crude pen-and-ink drawings, like a schoolboy’s own misguided attempt to do a Goodies File in a wet lunch break.

No schoolboy, though, could write anything half this great. That goes for most professional comedy writers too. These days it’s a rule of thumb that if a comedy bills itself as whimsical, but with an “edge” (or better yet, a “dark edge”), it’s really mixing two kinds of boring to produce a lump of quick-setting tedium that’s vaguely offensive in a precisely unfunny way. But take this line in Bestseller!‘s obligatory spoof small ad page (from Big Tentacles: “the magazine for the dominant squid”): “Calling all paedophile starfish! Asterisk Monthly caters for your needs!” That’s how you do it. And there’s an actual joke in there, too.

The overarching conceit of the book is that it’s a collection of personal papers of the eponymous Pode, incarnated on the show by Chris Emmett as the most wretched individual who ever lived. As with most overarching conceits, it doesn’t arch over that far, and a lot of the show’s material is just tacked on “as is”. But when it’s stuff like wartime radio parody It’s That Script Again (“Cor! Don’t forget the octopus, chum!”) that’s pretty easy to forgive. And it wouldn’t be a comedy book without a string of trad targets: The Wurzels, Clive James, Frank Muir and Lowestoft are all soundly drubbed, as are show contributor Douglas ‘Different’ Adams and cast member Nigel Rees, hawking “the ever-popular ‘Things Scrawled on Walls’, at only 95p in paperback – a mere 94p dearer than visiting the gents at Waterloo and seeing it all for yourself.”

* Incidentally, if anyone’s got any skinny on Burkiss‘s Radio 3 predecessor, Half-Open University, drop us a line, eh?