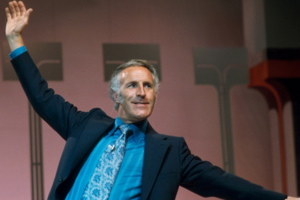 Nowadays thanks to the increased contestant quota, unnecessary messing with the format and the fact ol’ twinkle-toes is becoming evermore ol’ more wrinkled-nose, the funnies aren’t always there.

Which is a shame, as they were always one of the best bits, along with that sequence at the start where the couples stood in a long line swaying and clapping.

So in the interests of national revival and selfless levity, here are TV Cream’s suggestions of gags for Bruce to slip into proceedings, preferably preceded by a shushing-gesture to the audience and followed by a glance of disgruntlement at the floor manager.

“Now we all know that stars can get a bit picky if they don’t think they’re being properly serviced, so just before tonight’s show I had a word with Jason about the catering.

I asked him if he was happy with the food served in the BBC canteen. Why? he asked. Because, I replied, I thought you’d be more used to a Ramsay’s treat!”

“Now I’ve always been interested in astrology, so earlier today I asked Russell if he could tell me what the stars had to say about my future.

Well, he looked me up and down all over then replied: Not too good, dear. Your Mercury’s rising, I can’t tell Mars from your elbow, and the less said about Uranus the better!”

“You may not know this, but Nancy has launched her own brand of lingerie.

I said to her: what does that stand for, Nice Drawers? She said in your case, Nothing Doing.”

“I was chatting with Anita just before the show.

Anita, I said, tell me: were you a messy child? She said: Brucie, why do you ask?

I said: I was just wondering if you had a tidy playroom or a dirty den…”

“Now I’m sure we’ve all been struck by Robbie’s hair. Literally, in Ola’s case!

Earlier on I said to Robbie, your hair can’t decide if it’s playing home or away!

He replied, well at least it’s not like yours: off-side!”

“Just before the show, I said to Holly how much she must be looking forward to Christmas. Why? she asked. Because, I replied, it’s the time of year that everyone wants a piece of Holly! She took one look at me and said: To be honest, I’m more worried about the pricks. Well, I mean, really, the cheek!”

“I was talking to Lulu just before the show. I wanted to find out a bit more about her fantastic showbusiness career.

“Earlier today I asked Harry about why his band were called McFly.

He said: Have you never seen the film Back to the Future? He explained it was about a boy who finds himself back in the 50s. Oh yes, I said, I remember the 50s, that was when I first made it big. He replied: Oh no, it’s not set in the 1850s.”

“Now we all remember that Edwina once ran into a bit of bother with some eggs. So when I caught up with her during rehearsals earlier, I was everso careful not to bring it up.

Edwina my dear, I said, how egg-stremely egg-cited I am to see you on the show. You should have seen her face. She was *shell*-shocked.”

“Earlier today I went to Rory’s dressing room to say hello and introduce myself and so on. I’m afraid I couldn’t resist. Do me, I said. Go on, do me! So – oh no, be quiet, listen – so he did, and I have to say, I was terribly disappointed. I said, Rory, I’m terribly disappointed. He said: Why? I said, because I thought that first impressions were always correct!”

“I was talking to Audley earlier today and he asked me: Bruce, is it true you were once known as the Mighty Atom?

I could tell he was impressed, so I said, yes, it was because of my amazing stamina as a child star. Oh, he said, I thought it was because your jokes were radioactive!”

“Earlier on I asked Chelsee if, when she was at school for real, she ever had to face doing lines.

She said if anyone knew about lines and faces it was me.

“Earlier today, I was talking to Alex about how they chose the guests for The One Show. She said: Matt and I like to look at photos of star names and celebrities, and go: he’s One, she’s One, they’re One.

“Now, as well as being a TV presenter, Dan is a former professional tennis player.

When I was talking to him earlier, I said how much I loved going to Wimbledon each year.

He replied: Oh really, I’d have thought a man of your age would prefer Flushing Meadows!”

…And an extra one for Brucie to deploy during the final, which is being shown in 3D: