You can always trust the typing pool. Just days after we’d mentioned how TV Cream’s very own Peg and Kathleen were already hunkered down on the Mall, news of some impending regal nuptials duly arrived.

Instead, call it secretarial intuition. Plus the fact Kathleen once stepped out with the bloke who designed all those DIY periscopes that everyone used during Charles and Di’s wedding.

As if to compensate for last time round, both the BBC and ITV push the boat out. There’s a NATIONWIDE special the night before, with Frank Bough on top of a tall building like a weathercock and all the gang hyping things up no end, including Richard Kershaw talking to kids in the playgroup where Diana used to work. A couple of hours later come the fireworks, brilliantly billed by ITV as THE ROYAL FIREWORKS AND NEWS to keep Alastair Burnet happy. Raymond Baxter covers the sparklers for the Beeb (“The Queen and twenty craned heads from other lands…bonfire built by Boy Skates”), Andrew Gardner and Selina Scott for ITV. Elsewhere A PRINCE FOR OUR TIME on BBC1 explains that: “Prince Charles is Colonel of ten regiments.”

Absolutely. HRH THE PRINCE OF WALES AND LADY DIANA SPENCER IN CONVERSATION WITH ANGELA RIPPON AND ANDREW GARDNER lasts only slightly longer than its title, and once more goes out on both BBC1 and ITV at the same time. “The four participants demonstrated various methods of looking uncomfortable in canvas safari chairs with high arm-rests.” – C. James

After clearing its throat with TOM AND JERRY and BUGS BUNNY, the Beeb’s day begins at 7.45am with the bluntly titled THE DAY BEGINS. Coverage winds on through the morning, segueing into the perfunctorily titled CARRIAGE PROCESSIONS AND MARRIAGE SERVICE. A break between 1.45 and 3.30pm makes room for the news and a wildlife programme, before a NATIONWIDE special, cursorily titled HONEYMOON DEPARTURE, runs up to 5.5pm and DISNEY TIME SPECIAL with Penelope Keith. ITV has the one programme called THE ROYAL WEDDING from 7.30am to 1.45pm, then it’s the film HIGH SOCIETY until 3.45 and, yes, HONEYMOON DEPARTURE. A “special Royal Wedding Day edition” of GIVE US A CLUE follows at 5pm that is in no way different from any other edition.

The Beeb is distinctly underwhelming. Angela Rippon and Michael Wood are at TV Centre, Eric Robson, John Craven and Gillian Miles are mingling, and Tom Fleming is mithering. We have to wait until 3.30pm for the real deal: Frank, Sue L., Hugh Scully and Richard K. hosting a wedding party in the ‘WIDE studio.

Sod all. BBC2 opts for the same thing with subtitles (“so that viewers who are hard of hearing will not have to miss information and commentary”), though instead of the NATIONWIDE special there’s GLORIOUS GOODWOOD and PLAY SCHOOL.

Non-stop. Leonard Parkin is at it from the off: “She’s just peeped out of her window…the famous hairstyle…the Dress is in there.” Angie hastily follows suit – “We’ll be speculating on The Dress” – but it’s ITV who bag the Dressmakers and have Judith Chalmers to shout “That Dress, The Dress – I’m looking forward to it.” Eve Pollard tells Angie it will be a “Cinderella dress – real fairy-tale.” “Only two hours to wait now before we see That Dress,” rasps Andrew. “Ivory pure silk taffeta,” shrieks Eve when Diana is finally glimpsed. “Isn’t it a fairy tale?” shouts Judith.

Nancy Reagan is very much looking forward to the wedding – “I certainly am. Isn’t everybody?”; Arthur Askey tells some jokes; Joe Loss and his Orchestra play a few of Frank’s favourite rumbas; Barbara Cartland tells Andrew, “What I believe in, of course, is Romance.” 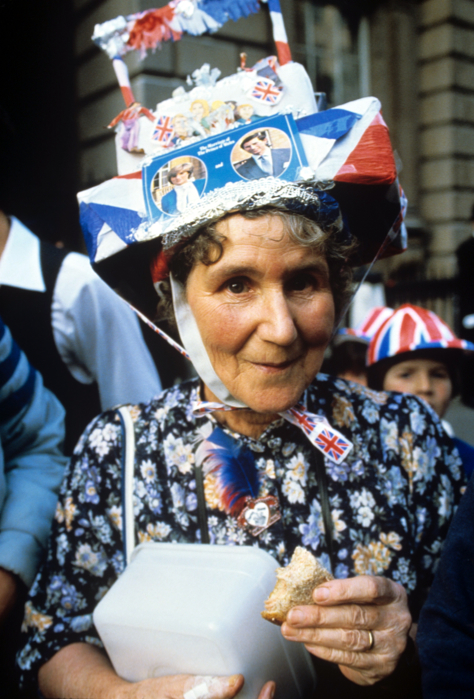 Even more than before. Alastair is seen booming, “Sir, what makes you play polo?” to which Charles replies, “I happen to enjoy horse activities because I like the horse.” “There’s Princess Anne,” continues Alastair, “who’s of course a tremendous expert on horses – she is a real expert on horses if ever there was one.” Sandy Gall reviews the mounted troops at Hyde Park Barracks. Tom Fleming observes, “Queen Elizabeth, like Prince Charles, loves horses,” besides once again demonstrating his Dr Doolittle credentials: “These bay horses look hale and hearty…and so, slowly, these horses find their way home.”

is everybody on the entire planet. NBC have bagged the best spots all along the route, according to a pissed off Frank, leaving the second best spots to the Japanese. “So exciting!”

Donny MacLeod gets under the feet of groundstaff at Balmoral Castle. Ian Wooldridge pokes his nose into Gordonstoun, Charles’s old school, before linking a montage of the Prince’s “sporting career”.

All leave has been cancelled: the Red Devils jump into Caernarvon Castle, the Red Arrows fly down The Mall and Kay Alexander jaws with the crew of Charles’s sometime berth, HMS Bronington.

Some good-natured buskers with hearts of gold; someone from Fuji TV has trouble saying “Royaroo famiree”.

Herbie, an ostensibly notorious waiter from the restaurant Costello’s, relates an incomprehensible tale involving the previous Prince of Wales. “Zer banquet turned out to be a castastrophe for myself – zer soup went all over his leg, which he had to go inner zer barseroom and have it removed.” “Do you have a message for the present Prince of Wales?” “A present?” “No, a message.” “God bless zer Royal Family.” Meanwhile Alastair Stewart bags the seat in the Goodyear blimp.

10/10. “Once upon a time…” “What you will see now is no fairy story, but the story of two very real young people.” “Hats,” he says, as the screen fills with hats. As the bridal carriage passes St. Clements, he waxes about “the bells that say orange and lemons.” “Throw a handful of good wishes after them,” he closes. 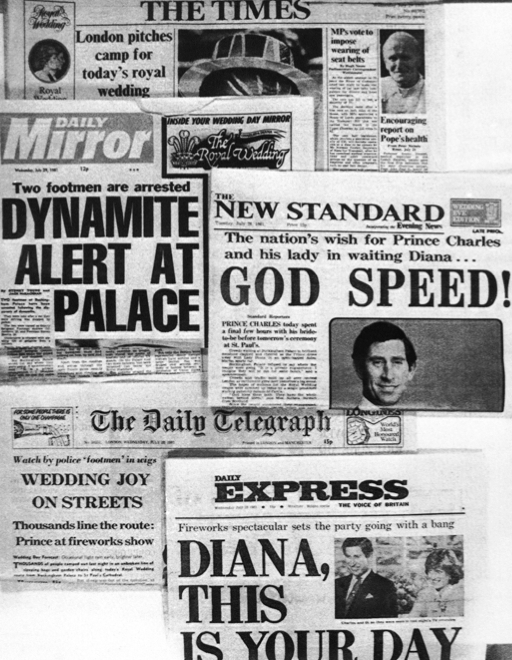