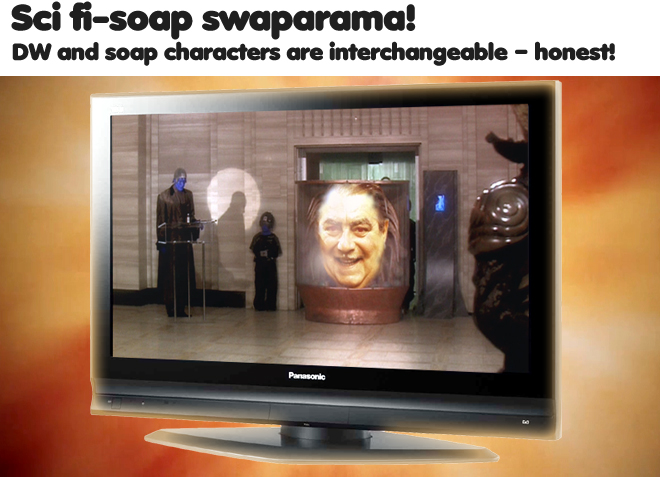 And we prove it by switching DW stalwarts with their soapy counterparts, and placing each in a well-worn tableaux of the genre…

SWAPPING: The Face Of Boe (The End Of The World/New Earth/Gridlock) and Stan Ogden (Coronation Street)

The arrival of THE FACE OF BOE at 13 Coronation Street raised eyebrows on the cobbles, but the double-glazed deity soon made himself at home amid the flying ducks and ‘muriel’, forging a much-loved trio with Hilda and lodger Eddie Yeats. He struggled when he attempted to take over Stan’s window-cleaning round, due to the fact that he was a window himself. Nonetheless, rumours persisted every time he was seen up a ladder at 19 Inkerman Street. A nation mourned when he breathed his last and Hilda wept over the glass, but there was some comfort to be taken from his final prophecy. “You are not alone,” he murmured… and indeed it wasn’t long before ‘Slim Jim’ Eddie found love on the CB airwaves with Marion ‘Stardust Lil’ Willis.

STAN OGDEN took to his role as a wandering cosmic lummox with surprising aplomb, travelling from planet to planet to dispense his brand of quiet-spoken wisdom (tips for the 3.10 at Haydock and how to get compensation from the council after tripping over a paving stone, mainly) acquired through billions of years of lead-swinging. Freed from the curler-clad tyranny of his other half, Stan cast a roving eye through the galaxy, even sharing an improbable assignation with a certain time-travelling minx. “Ee, what’s that psychic lipstick taste of?” “Spoilers, Stanley, spoilers!”

THE CONTROLLER‘s arrival at Baldwin’s Casuals didn’t go down well with the bolshie workforce. “An ongoing insurrectionary situation would not be acceptable to my management, Ivy!” roared the bushy-browed boss. Ever the stickler for accurate accountancy, the Plutonian kept a stern eye on Emily Bishop’s book-keeping, but after a lucrative order from Usurius Fashions fell through, the company faced bankruptcy and the he reverted to his natural state. “Eh chuck, he’s turned into seaweed!” cackled Vera Duckworth. “I haven’t seen anything like that since I washed our Jack’s vest!”

MIKE BALDWIN soon took to his new role as the ruthless overlord of Pluto, even if he never managed to find somewhere that served a decent Scotch and a Panatella. Alas, the fun-sized lothario didn’t get up to much romance in his Megropolis bachelor pad. “Bleedin’ ‘ell, you seen some of those Undercity birds? Make Bet Lynch look like Brigitte Bardot!” Still, at least his new position of authority ensured there were no more of those unwelcome visits from the VAT man, and those miniature suns in orbit around the planet kept his luxurious tan topped up.

PIGBIN JOSH slotted perfectly into Beckindale life as resident bumpkin, duelling with Alan Turner, working as a gamekeeper for NY Estates and politely failing to mention the blatant homoerotic tension between Amos Brearly and Mr Wilks at the Woolpack. So, nothing changed, really. NB: Witnessed the 1993 air disaster from the safe vantage point of a hole in an icy lake, and essayed excellent jaw all a-dangle reactions. Ditto Malandra Burrows song spots. Body later sapped of all energy by Kim Tate.

SETH ARMSTRONG arrived on the doorstep of the Nuton Power Complex to pit his comedy yokel chops (some textbook bike-work from the boys at HAVOC, by the way) against the golden-skinned gatecrashers from Axos. Alas for poor Seth, after he discovered the invaders’ craft, he was captured and analysed. “This specimen is valueless,” declared the effete extra-terrestrials. “And that woolly hat has so got to go.”

SWAPPING: Romulus and Remus (The Twin Dilemma) and Caroline and Christina Alessi (Neighbours)

ROMULUS and REMUS ruffled a few feathers on their arrival in Ramsay Street, not least when the bowl-headed boffins insulted Des Clarke (“Do you wish us to respect a fool?”). But in true Neighbours tradition, the tabard-clad teens (“Tunics by KAMIZOLE”) soon became pillars of the Erinsborough community, mounting a three-dimensional backgammon tournament in the Coffee Shop and nobbling an attempt by Joe Mangel to fix the winner. Unfortunately, their pop career proved somewhat less successful, the Stock/Aitken/Waterman-produced – erm – ‘Wespectable’ stalling at number 54.

CAROLINE and CHRISTINA ALESSI soon made themselves at home in the pastel-hued Sylveste household, not least due to its similarity to Madge Bishop’s front room. But it soon became apparent the brunette bombshells were not the intellectual equal of their counterparts (“Equations? Sounds a bit too much like doing the books at Lassiters!”) Further strife arrived when the twins were beamed aboard Mestor’s base on Titan 3 (“Eurgh, you’re even slimier than Paul Robinson!”).

TURLOUGH was dispatched to Albert Square on a mission by a dark, shadowy figure (Mr Papodopulous) to bump off Dot Cotton after she kept pestering him for a rise at the laundrette. The overgrown schoolboy initially attracted the derision of the residents of the Square (“Oi, aren’t you late for Latin?” mocked Pete Beale), but soon found himself at home in E20, even briefly joining The Banned on keyboards (before falling out with Harry in a row about left-wing politics). After his attempt to kill Dot with a rock was foiled by a minor gas explosion in Turpin Road, Turlough began to empathise with his intended target (“It’s like what the good book says, Turlough, love thy neighbour”) and abandoned his mission, enjoying a brief stint as a barman at the Dagmar, before returning to Trion.

NICK COTTON seemed like an improbable recruit to the TARDIS crew (“’Ere, this is a better way to travel than Ozcabs!”) and so it proved, as he attempted to get his hands on those bags of gold dust the Doctor keeps in the time-ship’s ottoman. Fortunately Tegan foiled his bid to cook up dinner and poison the Time Lord in the process (“Call that a well-prepared meal?” snapped the gobby Aussie) and Nasty Nick soon hit the Time Vortex again, where for a time he teamed up with an equally satanic looking cohort (“’Ello Ma…ster”).