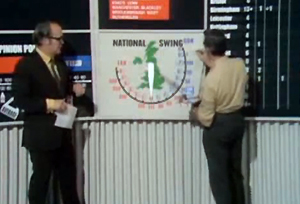 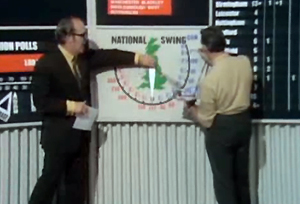 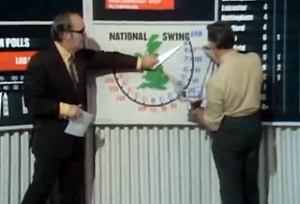 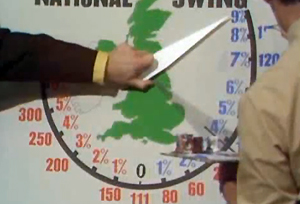 General Election results programmes are always tremendous fun for their sheer spectacle, but none more so than the poll of 1970. The first colour election, the Beeb pulled out all the stops with a studio the size of the QEII and seemingly the Corporation’s entire staff involved. This could have been a confusing mess but it makes for hugely informative viewing thanks to the Beeb’s on-screen personnel, headed of course by the unflappable Cliff Michelmore. But surely the friendliest face on election night belonged to the affable Bob McKenzie, a consistently enthusiastic figure who once said that the Election was his equivalent of the Cup Final and his obvious glee in the excitement of proceedings was hugely infectious and helped render politics comprehensible to a mass audience. His graphics were always clear and concise and got the point ac ross simply, though one election where they were found slightly lacking was this 1970 poll. It’s 1992 that’s always held up as the source of the most inaccurate prediction of all time, mistaking a marginal Tory win for a hung parliament, but most elections seemed to be all over the place in terms of guesswork (the hundred-seat Labour majority in October 1974 and the narrow Tory win in 1987 are two examples). In 1970 everyone assumed Harold Wilson was safe and sound in Downing Street until the first results came in and it turned out they were completely wrong and the swingometer simply couldn’t cope with the massive turnaround in the Tories’ fortunes, with the dial going right off the scale. Hence, around one in the morning, after a rather ludicrous anecdote from Alan Watson, a Beeb stagehand is dispatched with a pot of blue paint to put some more numbers on it. That image told you everything you needed to know about the election result without having to sit through twelve hours of discussion and Bob was smart enough to realise that sometimes the pictures can do all the talking for you.