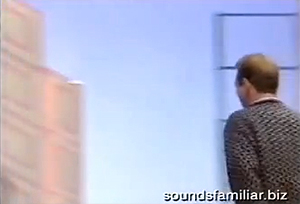 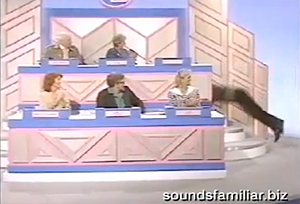 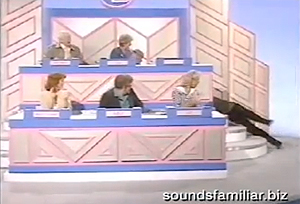 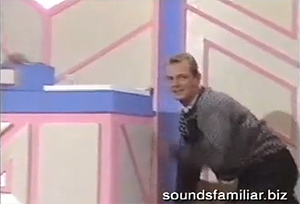 The one word you probably wouldn’t associate with Blankety Blank is “action”, yet one of the most famous moments from its entire run comes from a famous TV personality falling arse over tit while attempting a spectacular entrance. As we’re seeing on BBC4, Peter Powell was always a bit of a tit on telly, in the nicest possible way, turning up the exuberance just that little bit too much, and it’s the fact he’s involved that helps make this all the funnier. The clip we’ve got – a part of a very low concept feature from Children in Need 1985 which appears just to be showing off a VT machine, back when that was considered exciting – cuts off the beginning, and the context of the clip appears quite puzzling as to why Pete is running onto the set in any case. In fact it comes from the last time Children in Need wasn’t the marathon we know now but still po pping up in short bursts in between the rest of the evening’s programmes, which in this case included Blankety Blank. To that end they cooked up a bit of business where Tel would “link up” with Les who would announce that they were a panellist short. Surely the best idea would have been for Tel himself to appear, but instead Powell “volunteered” to nip across and participate (and he wasn’t billed in the Radio Times to make it all seem spontaneous), hence his dart onto the set, rather too fast as it turns out. Of course the ‘blank was actually pre-recorded and we’re not sure if his pratfall actually made it onto the finished programme but as you can see, it had already got an outing later that same night and became a staple of clip shows for many years. The fact it’s the overly boisterous Pete just makes it so funny, as too does his utterly sheepish face after it’s happened.