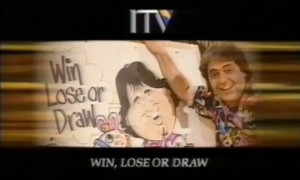 FLOWER IN THE DIRT of much that was daytime. Pictionary rip-off for celebs in a notional “front room” set with sofa (for the men) and floor cushions (for the women) plus drawing board, but all of that was secondary to the genuinely entertaining vim, whimsy and patter purveyed by our hosts. Best was DANNY BAKER, who explained the rules in typical manner (“It could be a very simple title like Kickboxer II, or it could be something very complicated, like ‘Mother of mercy! The squid! She no longer responds to mind control!'”) while dishing out yellow “sticks” as warnings for using hands and mugs of pretend money for whoever correctly guessed a demented trivia question. Second best was BOB “WAISTCOAT WEDNESDAY” MILLS. A member of the public bolstered each team and provided source for regional quips. Worth remembering for latent speed-drawing genius lurking within TOMMY BOYD. Worth forgetting is wretched “late and lewd” revival in 2004.