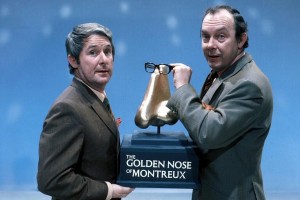 FORGET RUNNING WILD, their hopeless first foray into television during the 50s. From 1961 when they barrelled onto ATV, Eric ‘n’ Ernie’s small screen shows were incomparable. Masterstroke was acquisition of Scouse gag-master EDDIE BRABEN and producer JOHN AMMONDS for the BBC series after 1968. Out went KENNY BALL’S JAZZMEN and MILLICENT MARTIN and in came a dazzling array of guest stars, the brown paper bag and invisible stone schtick, the shared double bed, big musical numbers, and that Groucho Marx inspired dance. Reflecting a music hall inheritance, each programme would open with the pair appearing from behind mock theatre front-cloths. Some ribbing of Ernie would follow (“get out of that”, “short fat hairy legs”, “you can’t see the join”) and a guest star, usually asking for payment. Then some pastiches, like “Singin’ In The Rain” with Eric getting soaked while Ernie “does” Gene Kelly. SHIRLEY BASSEY wearing hob-nailed boots, or ANGELA RIPPON high-kicking to “Let’s Face The Music And Dance”. A bit more variety nonsense padded out the rest of the show before the final act, usually a play “wot Ernie wrote”, disrupted heavily by Eric’s asides to camera. In later years, with Morecambe’s health fading, Ernie would duet their signature tune, “Bring Me Sunshine”, with DES O’CONNOR or similar whilst Eric wandered around nonplussed in the background. Move back to ITV in 1978, leaving Braben behind, was the cue for a slow decline into creaky retreads, laboured gags and too many white studio backgrounds. When Eric died in ’84, Ern went on to write gardening columns for the News of the World.