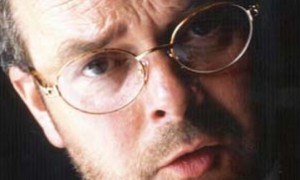 TRANSFERRED FROM RADIO (God knows, or cares, where), this plucky and “controversial” show kept the original title, to heartbreakingly ironic effect (see also THE GRUMBLEWEEDS RADIO SHOW). The bearded homunculus in charge was a hate-filled, hate-inspiring figure, taking on all-comers on the phone in what proved to be a try out for late 90s medium wave no-go area Talk Radio (which The Whale quickly moved to). Basically a rubbish radio chat show on the telly, with Whale sat at a mixing desk then in later shows in Radio Aire reception. He had guests and took calls from punters, utilising an all-powerful button-in-the-hand to kick out anyone who came on with “Oh, you ignorant cu-” type comments (which was, predictably enough, everyone). Videos (from the likes of late-period PiL, late-period DuranDuran, late-period Spandau Ballet etc.) modified the tedium. Later the shower moved up a gear for WHALE ON…, a proper TV chat show, with early appearances by Charlie Chuck, “streetkids” painting murals in the background, and token “outrageous” content (characterised by Peter Baynham as “the bit where a lady comes on in just her bra, and James Whale smiles.”) Mid-90s, it went one further and became THE JAMES WHALE SHOW, drafting in top “showbiz gossip” kid Baz Bamigboye, top punchable camp waistcoated Tory MP (as was) Jerry Hayes, and a very fat lawyer who helped with garden shed planning permission-type disputes from viewers’ letters. All were produced by Mike “Cue The Music” Mansfield.