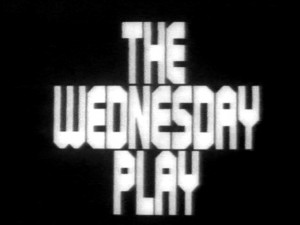 The stand-alone TV play, though long superceded by the series and serial (and often, subsequently and wrongly, seen as old-fashioned for that very reason), has been a fair guarantee of bold, disturbing, thoughtful and plain weird entertainment for as long as TV has been around, and the most well-known ‘strand’ of new TV plays must be the BBC’s The Wednesday Play (or Play for Today as it was renamed when the transmission day was changed from its reliable midweek slot to become a movable feast).

The Wednesday Play was started by incoming BBC Head of Drama Sydney Newman in 1964. Newman, a brusque,  combative refugee from Canadian television, had joined the fledgling ITV company ABC’s much-feted Armchair Theatre strand early on and revolutionised the play anthology with two important additions – the introduction of a story editor, whose job it was to oversee the season and commission scripts from new, untested writers; and the advent of “social realism” – plays about “ordinary” (ie. non-upper-middle-class) folk, often “hailing from the provinces”, exploring social and political issues through personal stories, which came to garner the mildly derisory (and rather misleading) tag of “kitchen sink” drama

The Wednesday Play was conceived as a replacement for the station’s two extant play strands, First Night (‘controversial’ new plays) and Festival (new productions of established works – Beckett, Brecht etc.) and initially overseen by producer James MacTaggart, whose Teletales series of experimental dramatic adaptations had recently aired, the initial brief was to get away from the ‘kitchen sink’ cliche that had dogged First Night‘s output, and produce more new scripts from new writers, using more innovative production techniques and ideas

The Wednesday Play‘s first transmission on 28th September 1964 was Richard Eyre’s adaptation of Nikolai Leskov’s A Crack In The Ice, and in the early days the strand bore little resemblance to what it would later become most known for – the first series of eight plays, billed as “a stimulating season of international drama”, was mainly made up of Festival‘s cast-offs, and only two were entirely original scripts and only one of those, Alun Richards’ The Big Breaker, about the tribulations of a Welsh small-town councillor, recognisably contemporary in setting.

However, by the advent of the second series in January 1965, the strand had really found its feet, and the strand continued to run the gamut of drama, from the old-school of ’60s realism given a new documentary edge (Up the Junction, Cathy Come Home) to experimental, often mind-boggling productions (House of Character, The Parachute), launching and abetting the careers of writers as diverse as Dennis Potter, Jim Allen, Mike Leigh and David Rudkin, and directors and producers such as Ken Loach, Peter Watkins and Tony Garnett.

There are, undoubtedly, a number of stereotypes with which the strand became associated. The political slant of the more overtly agitprop plays (writers like Alan Bleasdale, Jim Allen, Roy Minton) was almost invariably to the left, but even so there’s a far greater variety of viewpoints and styles on offer than the “gritty” council estate/picket line polemic of popular myth (though there was some of that too).

The second stereotypical trait of The Wednesday Play that springs to mind is the Whitehouse-agitating desire to shock a notional provincial, middle-aged middle class out of their supposed complacency. Actually, this is a pretty prevalent theme when you take a look through the canon, though again it’s embodied in a bewildering variety of styles and subjects. Then there are the numerous (and often deeply personal) Ulster-themed plays, real-life stories dramatised in many different ways, a slew of mid-life crisis and marriage break-up character studies, a smattering of science fiction, the odd musical, and stuff like House of Character that truly defies categorisation – there was much, much more to the strand than sordid sex ‘n’ striking dockers.

When it comes to a lot of these plays you could argue the popular drama vs. intellectual self-interest card indefinitely, but the ratio of intelligently popular hits to obtusely indulgent misses was respectably high, and most viewers have memories, whether fond, disturbing, or just plain bewildered, of at least one. Here we present a complete-as-we-can-make-it guide to the the 170-odd plays produced for The Wednesday Play strand, from the landmark plays to obscure, semi-forgotten oddities. Taken together with Play for Today, it’s an anthology of the finest quality and broadest range ever seen on British television. Yes, the plays could be bleak, they could be obscure, they could be demanding, but not as a rule. And while dramatic failures were not uncommon, potboilers – schedule-filling slices of say-nothing telly cut to length and served up with a dramatic shrug – were few and far between.

Perhaps more than anything it’s that characteristic that makes them stand out from today’s risk-averse dramatic landscape. These days, the drama that aims high and crash lands is marked on first sight as ratings Kryptonite, and seldom gets past the lengthy commissioning process. Sound business practice perhaps, but how many ambitious potential successes are smothered at birth along with them? An all-comers anthology strand, with just one (or sometimes two) committed individuals with broad taste and a spirit of adventure manning the gates, has never been bettered as a means to get original, groundbreaking and supremely watchable drama on the small screen. Now, with the tradition long gone, it’s regarded as too financially risky to bring back. Drama still continues to surprise and delight, but original voices are fighting a much tougher, more prolonged battle to reach the screen. The days when a chance meeting in a bar, a conversation with a decorator or an unsolicited script in the post from a British Rail employee could lead to a prime-time classic are, sadly, gone for good. Here are umpteen reasons to mourn that passing.