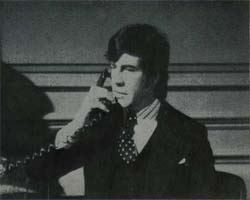 Peter (Alan Bates), a divorce lawyer in the thick of middle age, wakes up in the bed-sit of his graphic designer mistress Joanna (Georgina Hale), after another of their crafty lunchtime trysts. Back home, his university lecturer wife Hilary (Rosemary McHale) gives him the third degree over his whereabouts, as indolent son Jeremy wanders disinterestedly through. At work he presides over the messy alimony case of a Mrs Sawsbury, while his pupil and sometime squash partner Sallust (Simon Callow) looks on. Things begin to fall apart when Joanna starts to want more than a ‘lunchtime doss-down’, and admits following Peter about. He leaves, but she volubly freaks out, and he’s forced to rush back into the room.

Round the house of old school chum Charles (Dinsdale Landen), he confesses the distaste he feels towards the whole souring affair (“Making love to somebody you can’t stand but who’s infatuated with you makes you believe you have a soul. Otherwise why do you feel so rotten?”) All the while he smokes and slurps scotch – two vices it transpires Charles, happily married to Alison with an ever-increasing family, has quit. He’s gone vegetarian, too. (“Christ, Charlie!”)

In bed, Peter and Hilary discuss the couple’s new macrobiotic lifestyle, and Hilary mentions a “grubby public school dorm affair” between Peter and Charles in passing, and looks forward to a future of Sunday lunches and monthly dinners “until something happens to change them, a death probably“. All the while their sex life dwindles, and mysterious calls from public booths arouse Hilary’s suspicion. Another shambolic session with Mrs Sawsbury is interrupted by Josh, a friend of Joanna’s, worried about her well-being (“You’re the third man in a row to go wrong on her.”)

A frank chat with Joanna proves no help – her cry of “I love you!” makes Peter wince. A late-night fight between Peter and Hilary over his perceived hostility to the monosyllabic Jeremy (who has nothing to say on matters cinematic other than a vague “it was all right”) ends in phone call from a hospital, which thankfully proves to be from Charlie, Alison having given birth to a son. At Joanna’s, Peter attempts to make a break as cleanly as possible, but a definite end to the affair is left hanging. More relaxed than before, he enjoys a game of squash with Sallust, and afterwards they begin talking to each other properly for the first time.

This is cut short when Sallust collapses in the changing rooms, and dies. Charles – who resumed smoking in the hospital waiting room – says to the shell-shocked Peter, “The worst is to come, I suppose. The death of friends, all the deaths in waiting, including our own. But it’s the death of children that haunts me.” He asks Peter what Sallust was like. “Just a pupil. I patronised him a bit, ignored him quite often […] he was all right.” A typically wry, despondent play from Simon Gray, which ends on a simultaneous note of middle-aged despair and cautious optimism (will the death of Sallust turn Peter back toward his own son, and family?) It seems, in isolation, a rather straightforward piece for Play for Today, but the following week’s play casts a whole different light on things…