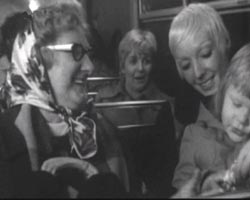 Colin Welland delves into a favourite subject of Play for Today writers, industrial relations, with a look at a strike in a Leeds clothing factory which took place just a few years previously. With a cast of hundreds and a budget well into six figures, it was at the time the most lavishly produced single British drama (Kenith Trodd at the helm, Roy Battersby directing). Reviled on transmission by local press and unions for misrepresentation of both the area and the workforce, its sympathies clearly lie with the workers as people, torn between the exploitation of the bosses and the self-interest of the union leaders.