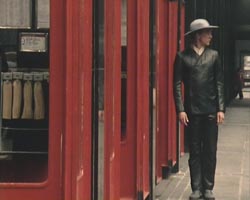 Bowing to popular demand, Alan Gibson resurrected his time-travelling milksop for a second adventure, which was shown a week after a repeat of the successful original. Starting – literally – where the Flipside… left off (the opening shot on the future beach is the same shot that ended the first installment), a Christmas dinner chez Hide (complete with A Christmas Carol on the videoscreen, the emotional punch of which Ava finds bewildering, though Dominick and Aunt Mavis can relate to it) is interrupted by Caleb, who sends Dominick back to 1982 to track an AWOL former pupil of Dominick’s, Pyrus Bonnington (researching street crime).

The first thing Dominick does on landing in the ’80s is to visit Jane, now living with their two-year-old son Dominick, and periodically absent muso Duncan, for an emotional reunion. Easing into his “comedy priest” role this time, Dominick tracks down Bonnington and gets him off a drunk and disorderly charge (a fondness for “GoodforyouGuinness” was his downfall). That evening at dinner Duncan rings, and Dominick thoughtlessly answer it, provoking a fight when he voices his disapproval of Jane’s “deception” when she explains him away as “just a friend”. She in turn raises his pan-historical two-timing, and they fight.

Worse, Bonnington is pissed again and is stalking a foreign dignitary abducted by terrorists in derelict building. Dominick arrives too late to prevent him falling to his death. Caleb sends Dominick back to the previous day, to “clean-wipe” the unfortunate events and save Pyrus. Dominick first replays the dinner – having the same conversation with Jane, but in more conciliatory tones. Then he foolishly mentions the “clean-wiping” procedure, and another row ensues, Jane feeling like a helpless toy under his temporal manipulation, and resenting his constant triving for blank contentment (“maybe I like a good old-fashioned bust-up”). Still, he manages to save Bonnington, who returns in Dominick’s saucer. They trace Bonnington’s saucer (which had been towed away by traffic police) to the house of a deranged elderly “boffin” (Michael Gough), who’s been tinkering with it on the Home Office’s behalf, and Dominick leaves in haste just as a government motorcade turns up to examine the craft.

Back home, Dominick has a small bust-up with Ava, who’s taken a shine to the Home Office-appointed virile male “home help”, but Aunt Mavis smooths things over, and, reunited with Ava, Dominick “clean-wipes” home movies of his past son (or rather great-great-grandfather) and finally severs his links with the ’80s.

If this sounds rather aimless compared to the compact quirkiness of the first production, it is. The wry take on relationships and the naivete of a sanitised future gains nothing from being trotted out again, and the Bonnington sub-plot comes and goes in a perfunctory manner. The banter between the two “priests”, the “replayed” dinner scene and Michael Gough are good fun, as is the usual threadbare wit in the visualisation of the future (here we see a dome-heavy outdoors). But the romantic, comedic and even sci-fi aspects are all too bitty, and there’s rather too much of Rick Jones and Meal Ticket this time out.

Despite the best efforts of everyone involved, the strength of Flipside… was its splendid isolation – properly respectful of the sci-fi genre, but avoiding its duller vices of plot-for-plot’s-sake and concentration on continuity at the expense of character. Another Flip… fell straight into these traps, and the result was just another sci-fi genre piece – and a substandard one at that.