“The world is a different place” 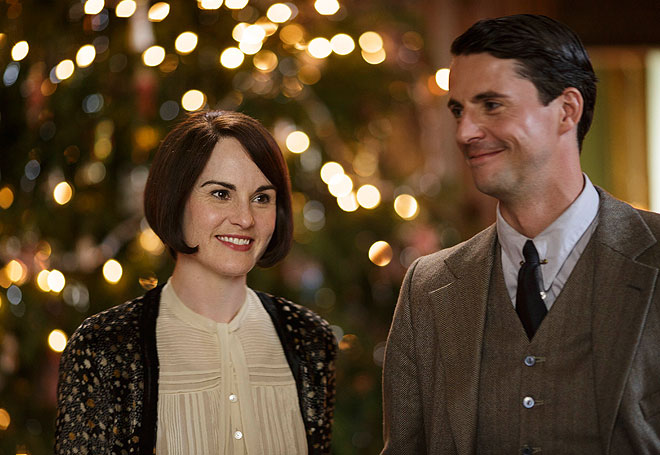 Despite declining ratings and the rise and rise of other entertainment options, festive telly continues to have something of a mythical status. There’s an expectation the schedules on 25th December should have something special about them rather than the usual workaday programmes we watch the rest of the year. Hence the importance of the big event – a last-ever episode, a big revival or the appearance of a host of special guest stars to lure you away from the turkey and cement Christmas Day’s role as a showcase of British television at its best.

With the likes of Netflix and Amazon Prime apparently cannibalising the audiences of the existing broadcasters, there’s surely an even bigger need for must-see TV that simply has to be watched. Perhaps surprisingly the biggest event on Christmas Day 2015 came from ITV, a channel that had often made a minimal contribution to festive cheer. Its renaissance in recent years has been thanks to Downton Abbey, and five years on the show came to an end with its last-ever episode.

Unsurprisingly the last outing for this phenomenally popular series pulled in the biggest audience of the day. This was good news for ITV, though it’ll be fascinating to see what will take its place both in autumn 2016, after a few years where it seemed to have been single-handedly holding together the ITV schedule, and on Christmas Day itself. Will ITV be happy to return to the pretty nondescript drama and light entertainment that cost-effectively filled the big day up until 2010, or will they aim to continue being competitive?

Certainly outside of Downton there doesn’t seem to have been much effort made in finding a replacement from their existing slate of programming. The rest of primetime on Christmas Day was inevitably filled up by the usual hour-long episodes of Emmerdale and Coronation Street. All sturdy enough, of course, and a fixture for millions, but it doesn’t suggest a great deal of long-term thinking at the light channel.

The rest of the schedule seemed pretty familiar as well – Santa Claus The Movie and Happy Feet were unspooled again in the morning, followed by an hour of highlights from their Text Santa charity initiative. After The Queen, while BBC1 catered for a young audience, ITV aimed old with a profile of royal correspondent Peter Wilkinson going under the banner of Cameraman To The Queen, and then a festive episode of its Countryfile-like series Countrywise, with another dispatch from Paul O’Grady at Battersea Dogs Home and You’ve Been Framed – now a quarter of a century old – leading us into the evening.

After Downton came something a bit more interesting, with a special tribute to a fixture of ITV Christmases past, Cilla Black, rather thrown away in a late evening slot when you’d think it may have merited a primetime airing on another night. With Dr No the midnight movie, ITV seemed very content to spend much of Christmas Day looking back, though while pleasingly nostalgic, this schedule didn’t seem to suggest much in the way of innovation over recent years.

Still, at least thanks to Downton delivering the goods, ITV came out of the big day with the most positive headline. Over on BBC1, surely the home of Christmas telly, the headlines were less impressive, with shows down year on year and a general lack of enthusiasm about their offerings. On paper, though, things looked absolutely fine – the channel was all-new from 2pm until after midnight, while the schedule was stuffed with some of the Beeb’s biggest names in its biggest shows. But somehow there was something lacking. It seems that it was missing that special ingredient which turns a good Christmas Day into a great one.

The early part of the day motored along in familiar style, including BBC1 outings for the revivals of The Clangers and Danger Mouse, which had debuted during the year and quickly proven as loved and cherished as the original series. After the religion came yet another outing for one of The Santa Clause films, this time the third in the series, followed by the third Madagascar movie. Then at 2pm came the Christmas Top of the Pops. As per, this one-off show was preceded by the news that the BBC were seriously considering launching a new music show to take the place of Pops on a regular basis, but we’d heard that before and the old stager is still with us. And we’re probably more likely to see TOTP in this spot at Christmas 2016 than anything else…

The animated film premiere that follows The Queen is now almost as much a tradition as the royal message itself, and Brave, though perhaps not one of Disney’s finest, turned out to be a pretty good choice with its British theme engaging a large audience. Following that and the news came Stick Man, a new adaptation of the childrens’ book by Julia Donaldson, which was great fun for adults and kids alike. Perhaps some of it was thanks to anaemic opposition from ITV, but these two hours were hugely successful for BBC1 and Stick Man in particular trounced a number of primetime programmes.

Then came the festive juggernauts, starting at 5.15pm with Doctor Who, celebrating its 10th anniversary as a Christmas Day staple. The show was very enjoyable and notable for the first appearance of Alex Kingston’s River Song alongside the current Doctor, but after the regenerations, new companions and huge guest stars of previous specials, this didn’t jump off the screen with excitement – not helped by the fact the most recent series had ended less than three weeks previously.

Strictly Come Dancing followed at 6.15pm, again with a host of previous contestants returning for a lap of honour, but sadly not featuring the return of Sir Bruce Forsyth as host, who was unwell. Brucie did at least make a short recorded appearance, but that perhaps wasn’t enough to ensure this special will live long in the memory. It did at least ensure it was BBC1’s most successful show of the the day, which given it was originally placed in the schedules to offer token opposition to Coronation Street is pretty good going.

The now familiar double-helping of drama followed with the fourth annual Call The Midwife special, pleasing the series’ many fans but not doing much to lure in any floating viewers. EastEnders followed for an hour at 8.45pm, although it perhaps inevitably found itself playing second fiddle to Downton, and even the show itself seemed to expect it, with most press attention diverted to the Carters’ wedding taking place in seven days time.

Mrs Brown’s Boys followed, one of three new outings for Brendan O’Carroll over the festive period with the two new episodes (and the stack of repeats that are a mainstay of the BBC1 schedules) accompanied by the premiere of the movie version on New Year’s Eve. The usual fun and games abounded, and if you liked it usually, you’d like this, and if you didn’t, it wasn’t going to convert you. After that Michael McIntyre was back for the third year in a row, and the fourth time in five Christmas Days, this time back at the Theatre Royal Drury Lane for comedy and variety with a guest list headlined by Dame Edna Everage and Tom Jones. Perhaps the most interesting programme on BBC1 came after that at 11.45pm – ensuring they continued transmitting new programming after midnight, a rare occurance – with Comedy Bloopers, a compilation of clips which had apparently managed to dig out some very rare footage, although how many of the audience were still sober enough to appreciate that is another question.

Overall it’s hard to argue with the BBC1 schedule which in terms of the amount of original British material and entertainment is probably as good as it’s been at any time in its history – there’s certainly no sign of anything like the episodes of Changing Rooms and Ground Force that found their way into primetime a decade or so ago. But nothing this year stood out as demanding to be watched – a solid schedule, but seemingly in the face of increased competition, solid isn’t quite enough.

Certainly increased competition is one obvious reason for the lower ratings on BBC1. Less than a decade ago Channel 4 would barely scrape a few thousand viewers on Christmas Day as it devoted its schedule to religion, history and the fine arts in a self-consciously alternative fashion. This year the audience stayed above two million for most of the day with a schedule as populist as BBC1, including the films A Muppet Christmas Carol, Scrooged and Home Alone 2, plus a kids’ spin off of the hugely successful Gogglebox. Alan Carr was back too.

BBC2 also managed to capture a million or so that might otherwise have opted for BBC1 with its Dad’s Army and Two Ronnies repeats, plus a new episode of QI. Chris Packham’s new series on the World’s Sneakiest Animals found itself starting on a rather unusual day, though one echo of the more traditional BBC2 Christmas came with Darcey Bussell reflecting on her Ballet Heroes.

Channel 5, as is so often the case, found itself straddling the sublime and the ridiculous, as it so often does. The Wizard of Oz was shown exactly 40 years after its first appearance on TV back in 1975, preceded by Scrooge and Seven Brides For Seven Brothers, while most of the rest of the day was cost-effectively filled up with compliations of Britain’s Favourite Christmas Songs and ABBA Songs. After last year’s primetime repeat of Chas and Dave’s Christmas Knees Up from 1982, you may have thought that was the ultimate bit of bizarre scheduling, but Channel 5 surprised us by… repeating it in primetime again! And then again 24 hours later!

With ITV2 also managing to pull in an audience of over a million for their umpteenth screening of Quantum of Solace – suggesting a lot of people still can’t have a Bank Holiday without Bond – and BBC3 (in its last festive season as an actual television channel) almost getting to the million mark with another run of Toy Story, it’s clear the Christmas Day audience is now more fragmented than ever, and programmes need to shout louder to make an impact. It isn’t a good idea to write the main channels off completely, though – a new companion for Doctor Who, a big movie and a return visit to Dibley or Barry Island next year, and things could be very different.