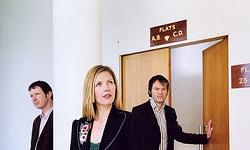 NOISY yoof-slanted and inevitably doomed to failure attempt at creating a hit new soap opera on the radio, as if Waggoners’ Walk and Mrs Dale’s Diary hadn’t ground to a humiliating halt over a decade ago after all. Even the ahead-of-its-time setting couldn’t do much to prevent it from committing the dismal crime of being as unsuccessful as Eldorado but almost unnoticeably so, and these days it’s only remembered for a bizarre cameo appearance by a So Tough-plugging Saint Etienne. No, really.