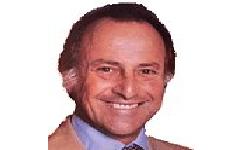 ADVANCED-LEVEL Big Band-fixated roller-back-of-the-clock extraordinaire who started in the dim and distant past of Radio Newsreel, Housewives Choice and Pick Of The Pops, which he inherited from Alan Dell in 1957, though it has to be said that rock’n’roll and indeed most of what came after was never really his ‘bag’. A much publicised “spat” with Pete Murray was in fact all cooked up for publicity (“people wrote to say they enjoyed the insults more than the pop records!”) though greater fame was acquired through his Man With The Triangle Nose-esque playing of multiple parts in snail-paced ancient radio sci-fi saga Journey Into Space. Proceeded to sidle around the network, most famously hosting the ultimate schedule filler Our Kind Of Music, and dallied on Radio 4 (Any Questions?, complete with on-air pelting with stones of Enoch Powell) besides moonlighting on telly (Come Dancing, Juke Box Jury and the early years of TOTP). Currently holding on in the Sunday night graveyard shift, “opening the cabinet marked…The David Jacobs Collection!”, and occasionally roped in by Radcliffe and Maconie for brilliantly punning Clapton-centric feature ‘Jacobs’ Cream Crackers’.