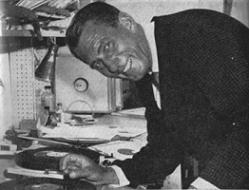 PIONEERING bandleader-turned-DJ who single-handledly dragged the BBC out of the chaps-in-suits era by playing nothing but pesky ‘gramaphone records’, interspersed with his comic repartee and mangled clips of Tony Hancock going into space or something, on weekly light programme effort Record Roundabout, getting away with it mainly by virtue of being a chap-in-suit himself. Wound up on Radio 2 after a short tenure on Radio 1, and continued broadcasting right up until literally days before his death. A huge influence on Kenny Everett, and for that reason alone, his name should be much better known than it is.