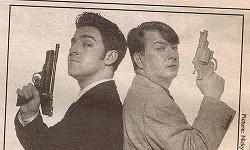 ROUNDTABLE REINVENTED for the Smoking Jackets-era NME generation, with the titular deadpan-lyric-quoting-favouring duo presiding over ruminations on the week’s new releases from ‘Guset Critics’ like Caitlin Moran and John Harris, with weekly rants from David Quantick, most of them thinly-disguised torrents of abuse towards Paul Weller. Succeeded by virtue of featuring amusing and outspoken opinions of people who actually had some experience of discussing music for the entertainment of others, most infamously massed rubbishing of Blur’s Country House and Oasis’ Roll With It, the latter described by Quantick as “arty and clever in the same way some bricklayers building a birdtable out of bricks is arty and clever”.