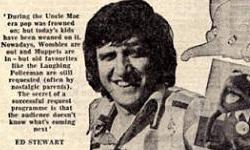 ‘STEWPOT’ was briefly king of all media in the seventies – witness his assorted tenures as affable cabbage-baiting Crackerjack frontman, resident Look-In gagmeister, and star of ‘don’t let your two-year-old talk to strangers’ Public Information Film, along with daughter Francesca – and his crowning glory was his long innings as a Radio 1 big name, a stature somewhat at odds with his could-do-better catchphrase: “Morning!”. Later moved to Nellie-centric Junior Choice presentation duties, while still a regular face on the Roadshow, and now to be found chez Radio Two.