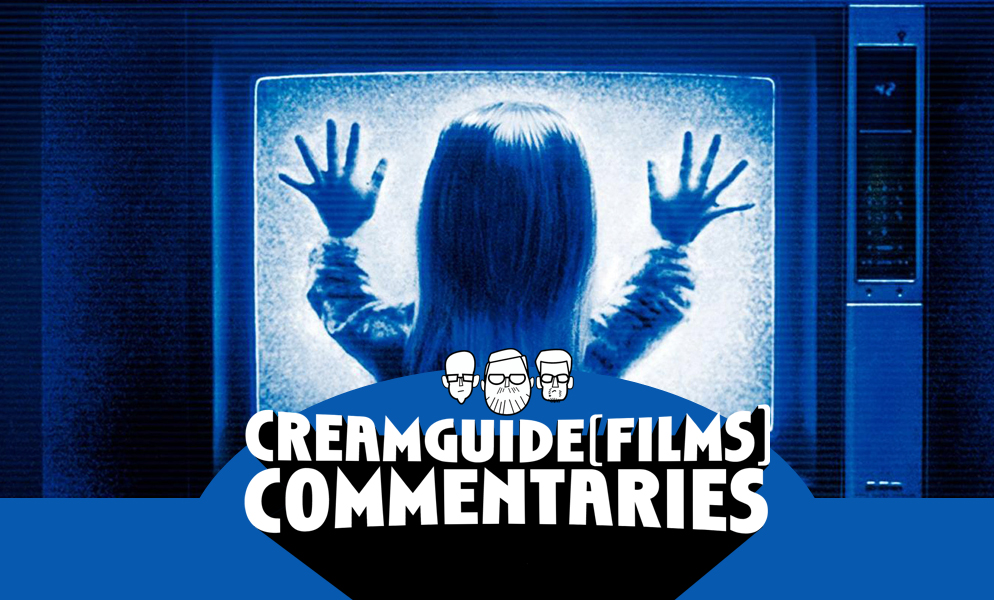 And we’re back in the room! Be afraid, be very afraid. On the Internet, no one can hear you scream. Anyway, come over to the other side with Chris, Craig and Jack down in the Valley for Spieleydrawer’s seminal horror bobbins from 1982: POLTERGEIST. It’s got everything! Impressions, bottles of ginger, ethnic misunderstanding, swearing about old shops and the triumphant return of Grant Brady: Hair Like a Lady. Kick it on after the ident and ‘enjoy.’ If you don’t want to listen to it using our player (above), then download it (129.2 MB). Or, to save you all this hassle, just subscribe to our podcast via iTunes. And this is our RSS feed.

SPOILERS: Jack’s Stone Roses impression is rubbish
THIS COMMENTARY IS RATED ‘A’
CREAMGUIDE(FILMS) REVERSE FAQ:
1) US telly (NTSC) had 525 lines, proper telly (PAL over here) had 625
2) E Buzz (the name, not the dog) came from Saturday Night Live. Which probably means it wasn’t funny.
3) The other E.T. crossover is that Drew Barrymore auditioned for this and as a result got the gig in E.T.
4) Both her and Heather O’Rourke (spoilers!) are buried in the same cemetery
5) He also has a poster for something called Super Bowl XXIII which wouldn’t take place for several years later. No one cares. He has an Atari too. In 1982!
6) A Guy Named Joe, 1943
7) ‘Reagan: The Man, The Cunt’ is available from Jonathan Cape
8) The clown doll is in Planet Hollywood in Caesar’s Palace in Las Vegas. Also horrific.
9) I have now. It’s ace.
10) We did. Coming soon.
11) Yep.
12) Love it so much got the name wrong: it’s James Lipton.
13) Bouillon de Culture. For fuck’s sake. It ran for ten years. Hence Brexit.
14) That’s Gene Shalit. Book and film critic for the Today Show from 1970 to 2010. And…he’s still alive! Aged 90 and still being ace in NYC.
15) “Eet ees an event sociologique!” Hence Brexit.
16) And based on chat in the film, she had her first kid at 16. Oh aye.
17) From 1989.
18) Spielberg was scared shitless as a kid by clowns and a tree that was outside his house. But he DID NOT DIRECT THIS FILM. Ahem.
19) The house is in Simi Valley California, it’s not missing and is still there and in fact, it says here, the same family still live there (not the Freelings.)
20) That is probably bollocks (hard to believe) but James Cameron and Peter Jackson prefer the term “extended edition” or “special edition.” Or especially in Cameron’s case for his latter efforts: “shit version.”
21) It lost to E.T.
22) Although remember it took some time after the US release for it to hit theatres in Britain. Those were the days, kids.
23) ‘A Growl and a Shout’ is available from Hodder & Stoughton.
24) By this logic, the house would have to disappear into an empty plot behind it.
25) 5 minutes and 2 seconds. Still a record. Hence Brexit.
26) This was the last scene to be filmed. Whatever that matters.
27) Brian Gibson. But he had nowt to do with this one. The cinematographer for this was Matthew F Leonetti.
28) The great James Karen.
29) Cohagen WILL return.
30) August 5th, 1981 (we recorded this ages ago.)
31) He did say ‘well’ a lot.
32) He sure is. 87, folks.
33) From 1989. She does have other credits, including several episodes of the epic Santa Barbara.
34) We went. And we saw her. Oh my.
35) Carl Weathers didn’t turn up
36) Unfortunately there isn’t going to be another one because this one didn’t make ‘enough’ money. Schmucks.
37) Though it’s worth noting the only character who dies is the Tweety the canary.
38) 11 months to the day: 12th October, limited scope anniversary fans.
39) Apparently, this was the only scene Heather O’Rourke got scared during the filming of.
40) I checked. It’s there in the credits of my VHS copy
CREAMGUIDE(FILMS) COMMENTARIES will return with more spookiness … in parts!