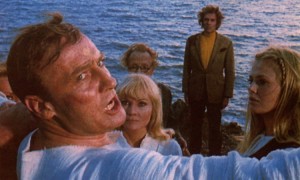 With the release of a director’s cut a couple of years ago, this Scots occult masterpiece – a long-cherished, genuine “cult” favourite in all senses – looked in danger of going overground, ending up on the cover of Total Film and being parodied in ITV sketch shows and the like. In the end, fans just replaced their moulding VHSs with a crisper, slightly longer version – added snails and speechifying, plus a bit of pre-credits plot telegraphing – and everyone carried on as normal. Rather like Christopher Lee’s unbroachable pagan island community, neatly enough. Which is why it’s so great, really – it remains just too odd to really fit in with your usual “classic” film shortlist, in practically every respect. Steering perilously close to amateurish in some aspects – the undercooked meat-and-potatoes direction, the weird pacing – it’s a misfit of a picture in which everything contributes to the film’s otherworldly creation of Summerisle and its virgin-sacrificing, Ekland-fancying, beetle-tethering, caper-cutting denizens. We’ll divide the acting honours equally between Lee’s languid lord and Woodward’s uptight Christian copper (sorry, Britt), while the visual aspect of so many of the films in this chart, namely that wonderful ’70s location Eastmancolour cinematography, is as evocative here as it’s ever been. And despite Lee’s myth-making about those missing cut scenes where he’s banging on about apples, the lengthy cut that’s now doing the rounds is pretty much perfect. As with American Werewolf, what captures the imagination is the mixture of genres and moods – here it’s the crossing of the folk realm of fairy tales and naivete (the folk songs, need it be said, are sinisterly brilliant) with good old gothic horror – although subtly done. “Killing me won’t bring back your apples,” indeed.