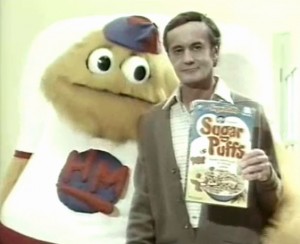 While adults stuck with their dull muesli and bran-based cereals in the morning, kids wanted something more interesting. For parents, the only way to stop them demanding chocolate bars at seven o’clock was to buy a sugar-based cereal. Sugar Puffs emphasised their child appeal by an ad campaign starring the Honey Monster, a sucrose-addicted, hyperactive behemoth who seemed to be in a flat share with Benny Hill stooge and Puffs ‘mummy’ Henry McGee. Numerous slapstick antics prevailed, with collapsing shelves and the like leaving a gurning McGee permanently ruffled. In time the Monster was joined by mate Oggi, a lime-green extrusion of fun fur with a hippyish flower in his gob and an uncanny resemblance to the assorted furries who would later be plugging Monster Munch. In 1988 HMr was paired with punk poet John Cooper Clarke to front a series of TISWAS-inspired adverts featuring plenty of gunging and shouting, and Clarke’s specially composed Snappy Badges Song, a paean to the rubbish free gift then floating around in boxes of the cereal; something of a change from the nice kids who previously colonised these sorts of ads.