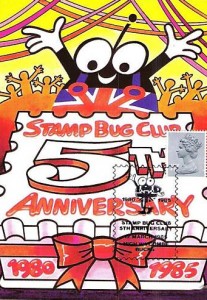 Led by a jaunty insect of indeterminate species in union jack dungarees and Michael Bentine’s eager voice, the Stamp Bug Club was set up by the Post Office in the early 1980s in a bid to lure school kids into the sinister realm of mint gutter pairs and first-day covers, his antenna ever-poised to alert collectors to the imminent arrival of the British Engineering Achievements presentation pack. The philatelic industry had long waged a determined campaign to part kids from their pocket money. How many nascent collectors, tempted by the irresistible lure of the small ads in the back pages of Whizzer and Chips, flouted the instruction to ‘please tell your parents’ and sent off for 150 ‘triangular’ stamps ‘on approval’, a phrase that conjured up images of inspecting a priceless cache of rarities through a jeweller’s eyepiece? Meanwhile, the philatelic godfather that was Stanley Gibbons held dominion over an army of collectors from his lair at the plush address of 399, The Strand. The Stamp Bug Club existed to market new British commemorative issues, which sounded pretty exciting in theory, but in reality carried the damp whiff of the school project about them. Sets depicting ‘textiles’, ‘folklore’ and, most boring of all, ‘cattle’, hardly set the pulses racing. Daydreams of stumbling across an immaculate Penny Black were hastily ditched, in favour of a return to trading Panini football stickers in the playground.